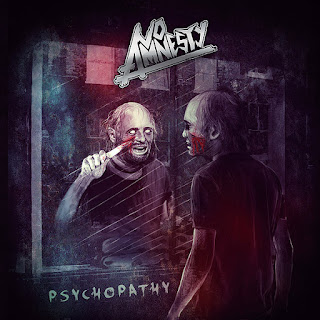 The rate at which labels like Xtreem Music and Punishment 18 Records continue to dig up new modern thrash bands is downright impressive. Europe seems to have no shortage of these bands, and fortunately, the former label has located yet another solid one. No Amnesty comes from Spain, and has just unleashed their debut record, “Psychopathy”. The band won’t throw many surprises at you, so once you get past the somewhat absurd vocals, you are left with a precise, but consistent thrashing.

It is worth addressing the band’s singer first: he can’t be defined as simply as many other thrash singers. He has a harsh edge to his voice, but is nowhere near death metal. Instead, he opts for a somewhat higher-pitched shouted shriek. He’s really one of those singers you have to hear to believe, but he definitely hearkens back to some of the more unique vocalists of the 1980s. On “Among The Blind”, he offers a nice surprise as he constantly aims for serious heights in his pitch. His aggressive sneer perfectly fits the crushing riffs that No Amnesty consistently offer.

Though “Psychopathy” isn’t an all-out thrasher akin to records like “Illusions” or “Decameron”, it rarely lacks speed or intensity. The moments where it does mellow out are done so in a very thrash way, reminding of classic Bay Area groups like Heathen or Death Angel. “Snake Eyes” marks one of the most impressive examples of the band’s ability to walk the line between brilliant melodicism and skull-fracturing thrash. Other efforts like “Evil Priest” and “Fight Below The Fire” show that the band can write solid hooks, even if none of these tracks are as strong as any of the classics they derive influence from.


“Psychopathy” is the complete package as far as modern thrash goes. It helps that the production accents the thick rhythm guitars, but also highlights their more melodic moments. Both “NOTLD” and "Snake Eyes", for example, feature plenty of harmonized guitars, which gives the bass lots of room to breathe. Even though the bass is present all throughout the record, this is just one of many examples of No Amnesty’s attention to detail (both from a songwriting and production perspective) that causes them to excel. As a result, “Psychopathy” is a very satisfying modern effort that stands head and shoulders above much of the rest of the thrash scene!