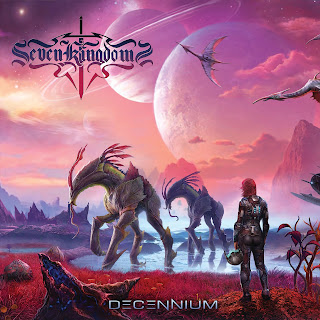 Seven Kingdoms is a band that falls into the rare category of being an American band that plays a more European style of power metal. Historically, there haven’t been too many bands from the US that can keep up with their European or even South American brethren, but Seven Kingdoms definitely shows a lot of potential with their fourth album “Decennium”. The defining feature of this band is the wailing of lead vocalist Sabrina Valentine. Though she can hit some pretty high notes, she switches back and forth between a more restrained, upper-mid range, and truly powerful high-pitched vocals. This versatility is best displayed on the album’s lead track: “Stargazer”, where the verses tend to be tamer, while the choruses are definitely more energetic. As catchy as the chorus is for this song, its whoa-oh sections bear an incredibly strong resemblance to Edguy’s in the chorus of “Sabre & Torch”. Nevertheless, this is a memorable song that gets the album off to a strong start.

As the album soldiers on, the band shows that they have some thrashy roots in them. The riffing in “Undying”, for example, definitely comes from a more aggressive place than you might expect on a power metal album. Many other tracks display a similar ferocity in their approach, replicating the feel of some of the heavier tracks on Gamma Ray’s “Land of the Free” and “Somewhere Out In Space”. Aside from this, Seven Kingdoms sticks to a lot of techniques that work well in power metal. Their music is extraordinarily guitar focused, with flashy solos, harmonized guitars, and plenty of lead melodies. The drumming keeps pace, particularly on the more upbeat songs where it primarily focuses on quick thrash beats to keep the energy high.

“Decennium” ultimately works well because of the band’s strong songwriting. The melodies and riffs are cohesive with little disjointedness, allowing the vocals to soar. Tracks like “In The Walls” and “Kingslayer” are easy singalong anthems, and though they might not necessarily reach the levels of the power metal gods they worship, they’re incredibly professional sounding. The band could benefit from cutting a track or two. There isn’t a specifically weak outlier, but Seven Kingdoms is definitely able to get their point across in a shorter time. Regardless, “Decennium” is an enjoyable power metal release that shows that American bands can definitely compete with many of their European counterparts!

Highlights
"Undying"
"In The Walls"
"Kingslayer"

at 7:43 AM No comments:
Email ThisBlogThis!Share to TwitterShare to FacebookShare to Pinterest
Labels: 2017, Decennium, Power Metal, Seven Kingdoms, USA 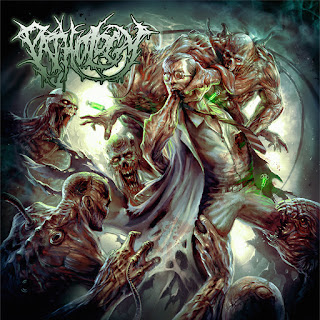 American brutal death metal band Pathology is returning in 2017 to unleash their next album to the world. It’s been 3 years since their last record, and while that might qualify as a normal wait for most bands, it feels like an eternity for Pathology, who released a new album every year between 2008-2014. Despite only having heard a subset of these records (“Legacy of the Ancients”, “Awaken To the Suffering”, and “Lords of Rephaim”), it is nonetheless clear that “Pathology” is incredibly true to the band’s vision. That means this record is a compact offering of brutal death metal, complete with gurgly vocals, heavily palm-muted and syncopated riffs, and mechanical-feeling drumming.

Even though this record is largely devoid of memorable moments, there is always an interesting riff being played. Pathology is certainly not a brutal death metal band that gets away with just being heavy; they actually compose crushing riffs, and they have so many of these riffs that they never feel stale. One thing the band excels at is writing slams. There aren’t a ton of them on this album, but when they do show up (such as on “Dissevered”), they are absolutely filthy. The band would benefit from incorporating more of these earth-shatteringly heavy moments into their music.

The production on this release manages to beat out most records from similar bands. Matti Way’s vocals are higher in the mix than one would typically expect, but he’s a far superior vocalist to most of his contemporaries so this isn’t a problem. It also keeps the drumming in check, as a lot of these bands tend to have a tinny crackling snare, but Dave Astor’s kit sounds like a more typical metal drumkit. The guitars, though downtuned, aren’t so low that they prevent you from deciphering the riffs. It helps that Pathology occasionally works their way up the fretboard instead of playing monotone sounding riffs.


Though “Pathology” brings nothing new to the table, it does continue to show why this band is among the best brutal death metal has to offer. The extra time off didn’t really make them any better, but more importantly, it didn’t make them any worse. This record is as consistent as can be, and any fan of slamming, gurgling, chunky death metal will dig “Pathology”.