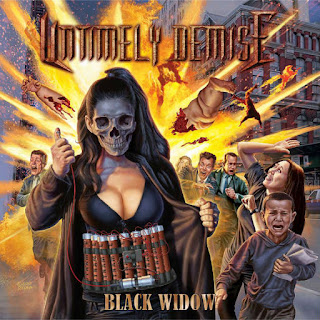 After 3 years, Canadian thrashers Untimely Demise are back with their third full-length album: “Black Widow”. While their previous album was very strong, “Black Widow” is an even more impressive offering. It manages to encompass a variety of styles and sounds, yet still has a very distinct focus. The band’s playing is extremely technical (listen to some of the crazy licks in “Forgotten In Time” for one example), yet this never dominates the music. In other words, these songs are still excellently crafted despite how absurd some of the riffs are. Additionally, the band remains immediately unmistakable from their peers due to the wild vocals of frontman Matt Cuthbertson. Though he employs a couple of different voices on this record, his most prominent is a truly wicked blackened thrash voice. It would be futile trying to sing along to this record because you’ll tear out your vocal cords in the process, which is unfortunate because a lot of these songs are incredibly catchy. Even though Matt’s voice is incredibly aggressive, it is still easy to decipher the lyrics on this record.

The highlight of the album is the opener, “Forgotten In Time”. While some of the early parts might be a little bit jarring, the chorus and subsequent post-chorus are incredibly memorable, with some fantastic vocal patterns that will be stuck in your head for a long time to come. The use of the post-chorus is especially effective because it acts as a method of amping up the intensity of the track. The best part of the song, however, is the entire second half: the band launches into a lengthy instrumental section featuring stupidly impressive guitar acrobatics. Of almost equal focus, however, is the bass playing, which pops out with some Steve Harris-esque lines. Much like on numerous Maiden songs, the bass isn’t necessarily playing a solo, but still has distinctive lines that complement the guitar work. “Forgotten In Time” isn’t the only long instrumental section, as the title track does something similar near the end, but it is the most impressive.

Melodic guitar playing is actually much more of a focus on this record than one might expect from the typical black/thrash album. Every track is filled with numerous guitar solos, often played by the band’s frontman, but there are also some guest shredders on this record too. Even when the playing isn’t about fitting in as many notes as possible, the band still makes melody an important characterstic of their music. “Cancer of the Heart”, for example, has some melodic undertones throughout the chorus that add a lot more depth to the song and separate it from the remaining tracks on the album. Another song, “Calling Me Back From The Light”, kicks things off with a quieter, more subdued intro, letting a sole lead guitar guide the way before erupting into a more violent track.

Because of the fact that the guitar playing is so prominent on this record, the band’s influences become quite clear. The aforementioned “Calling Me Back From The Light”, for example, has one lick in one of the solos where you can distinctly hear Jason Becker’s influence creeping in due to the way that section of the solo is played. Similarly, the closer, “Holy Man”, busts out some “Symbolic” era Death melodies in its intro. Death appears to be a major influence on Untimely Demise, often in the form of Steve DiGiorgio-like wandering bass lines, as well as many of the odd leads that are prevalent on the record.

It almost feels criminal to get this deep into a review and not have mentioned some of the songs on this record. “Anticolonizer” is a song so good that the band recorded it twice. Ok, not quite, but there is a second version at the end of the record that features Shawn Drover (ex-Megadeth, Act of Defiance, Eidolon) on drums instead of the band’s new drummer Bryan Newbury. There’s definitely a noticeable difference between the two recordings, as Drover implements some fills that make interesting use of toms in a way that is absent on the rest of the record. This isn’t to say that Newbury does a bad job though; in fact, his playing absolutely crushes. The only way to complement musicianship as good as Matt and Murray Cuthbertson’s is by matching it with equally impressive drumming. The reason why Drover’s playing stands out, though, is simply because there’s always a difference when you hear 8 songs in one drummer’s style and then move on to another drummer for the last song. Though this is a great track, it does feel a little redundant to put it on the record twice. Truthfully, either version is more than sufficient of making the final cut, so it probably would have been best to pick one version and go with it. This is especially true given that the second to last track, “Holy Man”, is one of the best on the record, and would make for a great closer.


“Black Widow” is clearly a record that the band has invested a lot of time into, both in the songwriting and recording process. There are no duds on this album, and every song has more than a few distinct parts to enjoy, alongside the general carnage throughout the record. Untimely Demise already had a unique sound compared to a lot of their peers, and “Black Widow” takes that a step further. This record might be a difficult listen if you don’t like solos because there are a lot of them, but the lead playing doesn’t feel indulgent or excessive. Instead, it adds chaos to an already chaotic record. The end result is that “Black Widow” is one of the most compelling thrash albums in decades, and will be looked back on as fondly as anything from the 80s! 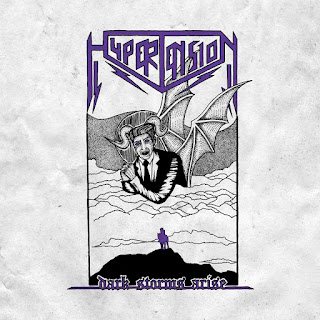 It’s been a couple of years since we last heard from Sweden’s Hypertension, but they’re back now with a new EP. For those unfamiliar with the band, they play an incredibly convincing blend of styles, melding speed metal, thrash metal, and even black metal into one wild concoction. Their overarching sound could be best described as Venom at double-speed. Hypertension’s vocalist manages to channel the spirit of Cronos. Their music is also similarly built upon a foundation of old-school NWOBHM, though to the band’s credit, they are able to inject their own influences into things. For example, while there are a lot of those simple 1982ish riffs on this release, Hypertension also utilizes riffs that have a touch of dissonance, which would not be out of place on some mid-1990s melodic black metal album.

As the EP rages on, the band further experiments, using blast beats on “Death’s Rage” (though they’re very much in the background relative to how many other bands use them). This song also shows the band incorporating harmonized leads into their sound. The tempos are pretty much always high on every track, and the band never lacks energy. Much like the band’s first two releases, “Dark Storms Arise” has pretty much the perfect production for this sound: enough clarity to understand what is going on, without sacrificing any atmosphere.

The closing song on this release is a cover of Razor’s “Iron Hammer”. While not my favourite song from “Evil Invaders”, pretty much everything on that album is a masterpiece, and Hypertension does the song justice. In fact, despite my early claims about their vocalist sounding like Cronos, he does his best Sheepdog impression on this track. This song is actually a great pick for their sound, as Razor always had tons of those hyper-charged NWOBHM riffs in their sound.


“Dark Storms Arise” is another must-purchase from Hypertension. At this point, it’s hard to foresee the band doing any wrong. The execution has always been there, and their songwriting is still on point. It’s not too late to jump on the Hypertension bandwagon, but I’d do so sooner rather than later because these guys are pumping out great material at an impressive pace!
Be sure to check out and like Hypertension on Facebook!