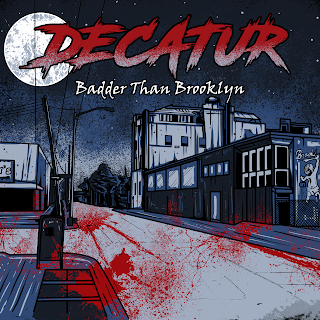 Decatur is the newest moniker for Toronto-based heavy metal band Caym. Our paths have crossed a couple of times before, as I’d seen the band live in 2013 and 2015 under their old name. Truthfully, they were far too groove-laden (i.e. metalcore and Pantera-influenced) to be any good in a live setting, particularly as both bills had far superior bands. A new identity marks an opportunity for change, however, and “Badder Than Brooklyn” shows this to be partially true. To the album’s credit, it gets off to a decent start. “Internal War” kicks the record off with the thrashiest riffing on the album, and the following track opens with some Maiden-inspired harmonized leads. These types of moments are few and far between, however, as the band quickly reverts to their tough-guy influences.


While these two tracks have their upsides, most songs don’t. The speed is occasionally there, but the half-baked growling, lack of powerful drumming, and avoidance of melodic hooks makes for a largely boring effort. The biggest problem that bands like Decatur have is a fundamental philosophical difference in what heavy metal should be about. There’s a reason why it’s easy for many metal fans to enjoy everything from power metal to black metal to thrash metal, yet almost all of us fail to enjoy any band whose main influence is Pantera. Even if the means each band uses are different, most metal bands strive to conjure the same feelings. It’s not about trying to look cool or pretending to be the angriest person around. It’s mostly about empowerment in some form, and bands like Decatur seem fail to understand that, and ultimately miss the mark.