Blazon Stone – War Of The Roses 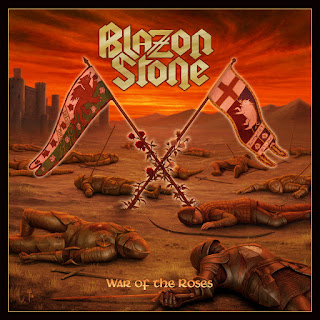 If there is one thing in the world you can count on, it is that Swedish multi-instrumentalist Cederick Forsberg is going to release a ton of music each year. As we approach the end of 2016 with no Rocka Rollas or Breitenhold in sight, things started to get a little worrying, but unsurprisingly, he has come through and put together both a full-length and EP for his Running Wild worship band, Blazon Stone (Ced does have projects other than these three, but these are the most worthwhile ones). “War Of The Roses” is the band’s third full length in four years, and is exactly what you would expect it to be. As noted above, Ced is extremely dependable, and this album offers little in the way of surprises or letdowns. This is a good thing because even though Running Wild is inching towards the right path again, they’re not coming anywhere close to being as good as Blazon Stone.

If you’re familiar with either of these pirate-esque bands, you know all of the musical tropes: catchy songs, intricate tremolo picking, tons of unique melodies, and so on. Of course, there is a new singer for this release, but he does an impressive job of channeling Rock ‘n Rolf without being a complete clone. Since the overall sound of the band is familiar territory, it’s better to talk about some of the individual tracks themselves. The quality of the songs on “War Of The Roses” tends to be a bit more extreme. There are several really killer highlights, but also a couple of tracks that are just there. Opening song “Born To Be Wild” comes in with all guns blazing and might be the fastest Blazon Stone song to date. Speed works in the band’s favour, as this brings an almost thrashy quality to the record, and certainly sets up the rest of the album well.

Other songs like “Mask of Gold”, “Stay In Hell”, and “Black Dawn of the Crossbones” are just excellently executed heavy metal: lots of good riffing, and no real head-scratching moments. If there is one disappointing track, it would be “Lusitania”. This song is considerably slower than much of the rest of the record, and the melodies are a bit too happy for this style of speed/heavy metal. The real problem, however, is with the backing vocals used in the chorus. It comes across as being overly cheesy, but not particularly enjoyable. In direct contrast to this is the album’s title track, “War Of The Roses”, which uses a similar style of vocals to great effect. In fact, this last song is a serious highlight, and feels like the first true “epic” of the band’s career (they’ve had some long songs before, but this is the first one to be that perfect album closer).


One other standout song is the instrumental “Welcome to the Village”. Running Wild has undoubtedly had their share of great songs lacking vocals, but Blazon Stone takes a different influence on this song. It feels much more inspired by Iron Maiden, with prominent bass lines that are marching all over the fretboard amidst a flurry of excellent riffs. The brilliance does not stop here, with “Soldier Blue” rounding out the noteworthy tracks. Once again, it does nothing particularly unique, but has a chorus that will remain with you for days. If any real criticism could be made of this record, it is that fatigue is starting to set in on my end. Yes, “War Of The Roses” is more authentic than Running Wild at this point, but Ced has put out a lot of really similar sounding records since 2011 or so with that first Rocka Rollas release. There isn’t a single one I dislike amongst his three best bands, but there are just a lot of songs to digest. As long as he is still pumping out tracks like “Born To Be Wild”, “Soldier Blue”, and “War Of The Roses”, this prolific pace is still justified. Overall, “War Of The Roses” is yet another winning record for fans of speed metal!

Highlights
"Born To Be Wild"
"Soldier Blue"
"War Of The Roses"

at 9:52 AM No comments:
Email ThisBlogThis!Share to TwitterShare to FacebookShare to Pinterest
Labels: 2016, Blazon Stone, Heavy Metal, Speed Metal, Sweden, War of the Roses 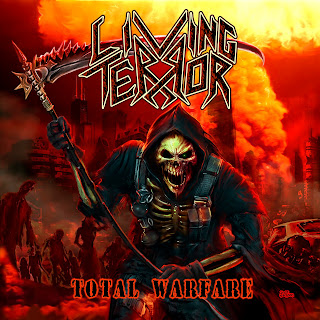