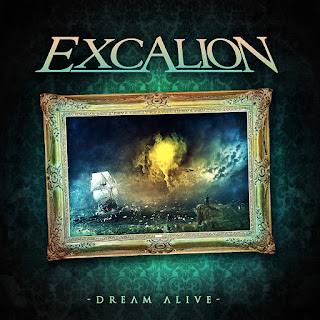 It’s been a long wait for fans of Finnish power metal group Excalion. “Dream Alive” is the band’s first record in 7 years, following the excellent “High Time”. There has been some turnover since then, with the band’s longtime singer departing and a new vocalist joining a couple years ago. Naturally, the question is whether or not he can stand up to the old singer. Obviously, he isn’t identical, but his performance here really doesn’t sound significantly different from the band’s last vocalist. He has an incredibly thick accent that is immediately noticeable. A lot of syllables seem to be pronounced in similar ways to the last singer, so unless you’re a mega-fan of the band, it’s likely that this change won’t be too jarring. And even if you are, the new singer does just as good of a job as the band’s old singer. On some occasions, he enters another stratosphere with incredibly animated screams towards the end of certain songs (“Centenarian” being the best example).

Musically, Excalion hasn’t changed a bit either. They’re still among the happiest power metal bands not named Power Quest or Freedom Call. They often achieve this via bouncy rhythms, and powerful, explosive choruses. The keyboards remain very much in the forefront of the band’s music, often being used for the main melody of each song (with the guitars playing support power chords). To Excalion’s credit, their bass player makes a notable impact on this record with all sorts of exciting fills, particularly in some of the quieter moments. The band is still exceptional at writing compelling slower or mid-paced songs. One such highlight is “Marching Masquerade”, which quite literally marches as it builds momentum to the chorus.


Because “Dream Alive” is musically faithful to its predecessor, one would think it should be every bit as enjoyable. Truthfully, this album is going to get far less spins than “High Time”. In part, this is due to the excessive runtime; at nearly an hour, it is 12 minutes longer than the band’s prior release. But it also has somewhat weaker songwriting chops. There is no shortage of sugary sweet melodies on this record, but the number that will stay with you is limited. By the time you’re four or five tracks in, it feels as though you’ve heard it all. Even the 11-minute closer, "Portrait On The Wall" doesn't do anything particularly unique. Ultimately, there’s no reason that a fan of Excalion would dislike this album, but as a fan, its playtime will be admittedly quite limited. 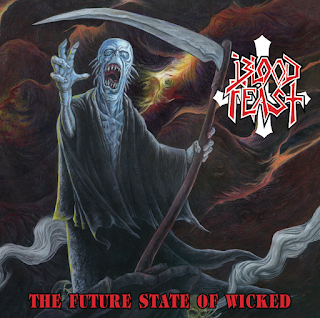 Though Blood Feast was one of many 1980s thrash bands to make a comeback in the last decade, the band decided to wait a bit before releasing their first record in years. Most of these bands are better as nostalgia acts, but with Blood Feast, that just isn’t the case. They arrive in 2017 every bit as vicious and aggressive as they were in 1987. “The Future State of Wicked” is a constant charging effort, overrun with high-speed thrash riffing and absolutely maniacal vocals. The band’s current singer may not have appeared on any of the classic stuff, but his voice is decidedly old school, and would have fit with their old music perfectly.

Relative to “Kill For Pleasure”, for example, “The Future State of Wicked” is quite a bit cleaner. Don’t mistake this as being too modern, but that album was a bit of a mess, and it feels like the band has tightened up considerably since then. The production on this release is an ideal fit for very raw death/thrash, with the primary driver being a sharp guitar tone. The buzzsaw riffs with get any neck banging, and are interspersed with spastic solos that would make Slayer proud. The drumming is likewise fairly active, with a number of impressive fills. There are some slower moments on the album (parts of "The Underling" come to mind), but there isn't a plodding track, as everything that isn't lightning fast is still crushing.


Highlights come early on this record, with the opening two cuts being the most ripping. Both “INRI” and “Off With Their Heads” will stay with you long after this record ends, due in large part to the throat-tearing screams of each track’s title in the chorus. The rest of the album doesn’t disappoint, but isn’t quite as memorable as these two tracks. Regardless, Blood Feast fans and even thrash fans in general that have yet to discover the band should love this release. The band does absolutely everything right and nothing wrong, and in a world of pointless comebacks, Blood Feast stands tall above the crowd!

Highlights
"INRI"
"Off With Their Heads"