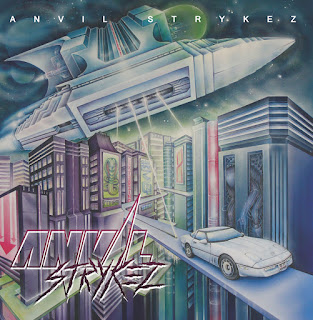 Upon first glance, the self-titled record from Finland’s Anvil Strykez appears to be an awesome speed metal record in the vein of Scanner or Assault (CAN). After all, it’s got that retro 80s, yet somehow futuristic album cover. The music on this disc certainly fits that theme, but it is a far cry from speed metal. My limited research shows that this falls into the genre of synthwave, which appears to be very similar to a lot of 80s video game and action-movie music (bear with me on this review; I rarely delve outside of metal).

Much to my surprise, the result is astounding. The fittingly titled “Neon Streets” kicks things off and is by far the catchiest and most brilliant song. Like much of the record, it is an upbeat tune, driven by a disco drumbeat. There are several “four on the floor” beats all throughout the album, and they keep the energy high throughout the record. This particular track has some brilliant synthesizer melodies (but there is no shortage of catchy leads).

“Anvil Strykez” is a record where the keyboards and synthesizers do most of the work, but the guitar usage is excellent. There are many tracks with more subtle usage of the instrument, allowing the synths to remain the focus while the guitars add a bit of heaviness and diversity to the music. Of course, since Anvil Strykez appears to come from the metal world (this record was released on Hells Headbangers after all!), there are some guitar solos, and while not the flashiest ones, they complement the robotic atmosphere. One slight exception is “Metropolis”, which features some killer shredding at the end.

Another way in which Anvil Strykez achieves their post-modern vision is with the usage of samples. A song like “Exterminators” features some quieter spoken sections. They never overtake the rest of the music, which is why they’re so effective. The focus remains on the constant, pulsating thumping with the samples adding a little flare. "High Speed Cyborgs" takes this a step further, by masking a robot voice atop the lyrics.

Aside from these moments, this is not a totally instrumental record. “Metropolis” features plenty of singing. Often times a one-man project will not have a particularly great singer, simply because it’s difficult to play every instrument and sing at a respectable level. This is true of Anvil Strykez as well, but unsurprisingly, this doesn’t hurt the band at all. The band’s mainman has only a limited range, and isn’t particularly expressive, but he sounds so authentic. This is one of those instances where passion and creativity transcend talent, resulting in an irresistible song.


Despite the album closing with an epic (“Voyager and the Birth of Time” exceeds 11 minutes), the record mostly feels like one consistent journey. Each song does have its own unique theme to it, but as an admittedly amateur listener of this style of music, only a couple of songs stand above the rest and are worthy of individual listens. For the remainder of the album, it is best enjoyed when running through the entire record. The good news is that this album has made a believer out of me, someone who listens almost exclusively to metal. That is a serious testament to the power of Anvil Strykez and synthwave! 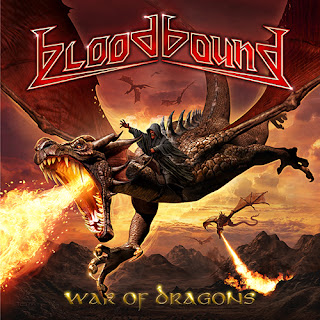 Swedish power metal band Bloodbound always seemed to have a bit of an identity crisis. While the band shuffled through various sounds from traditional power metal (“Nosferatu”, “Book of the Dead”, and “Unholy Cross”) to a more progressive sound (“Tabula Rasa”, also their masterpiece), to a Dream Evil-inspired sound (“In The Name of Metal”), it seems like they’ve finally settled on their current phase with their most recent records. “War of Dragons” picks up where “Stormborn” left off, and is an album featuring heavy Sabaton worship. All of the songs on this record consist of massive choruses that are clearly inspired by Bloodbound’s Swedish counterparts. At times, the similarities are too obvious to dismiss, but that might just be because this is a fairly limited style (Sabaton often repeat themselves, and Powerwolf, another band in this vein, also puts forth the same album every 2-3 years).

Despite the fact that Bloodbound has zoned in on this poppy sound, they are very good at it. Many of the songs on this record can compete with even the strongest Sabaton tracks, and the fact that Bloodbound’s singer has a much higher range will likely appeal to more typical power metal fans. He has no problem hitting some insane screams, but he also has enough power in his voice to pull off harder-hitting efforts like “Stand and Fight”.

The three standouts are “Battle In The Sky”, “Tears of a Dragonheart”, and especially “Stand and Fight”. These songs are driven by absurdly catchy choruses, and upbeat tempos. They often have fun, bouncy rhythms and are built for festival crowds to sing along to. “King of Swords” is also a noticeable track simply for its balls-out approach that features Patrik Johansson screaming his lungs out for much of the song. Most songs on the record open with the chorus, featuring huge keyboards and a memorable vocal line, and then move into either pounding mid-paced rhythms, or speedy militaristic beats.


The only time that Bloodbound does anything substantially different on this record is on “Silver Wings”, where they incorporate some folkier elements into their sound, as substantial parts of this song are led by a Nightwish-esque melody. The result is effective, and a nice change from an otherwise one-dimensional record. It may sound like an indictment of the band that “War of Dragons” is essentially a Sabaton record with a more diverse singer, but it’s really more of a compliment. There aren’t any other similar sounding bands that can compete with Sabaton, and Bloodbound absolutely can. If you’re a fan of one of these groups, you’ll be a fan of the other, and that means there are a lot of people that need to hear “War of Dragons”!