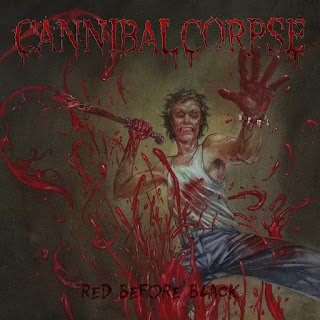 Cannibal Corpse often gets referred to as the Motorhead or AC/DC of death metal, but that description is somewhat unfair to the band. As great as both of the aforementioned groups are, Cannibal Corpse managed to be equally consistent, but also more unique with each record. Sure, every album this band has put out sounds definitively like Cannibal Corpse, but for a long time, their releases continued to have an individually identifiable feel to them. Even when they really started to settle into a predictable and comfortable sound with “Kill” and “Evisceration Plague”, they then went out and hit a home run with “Torture”, writing some of the catchiest and most brilliant death metal songs ever.

From there, the band’s path has been less clear. Truthfully, “A Skeletal Domain” was not the pinnacle of their creativity. It wasn’t bad, but it was the album where the band definitely got a little too comfortable. In many respects, their newest record, “Red Before Black”, is quite similar. The band brought back Erik Rutan to produce the album, but didn’t re-elevate their songwriting to the level of “Torture”. This doesn’t mean “Red Before Black” is a weak effort though. It’s a competent Cannibal Corpse album with a handful of truly potent songs. Of the 12 tracks, each of the first 7 manages to stand out in some way (something that could not be said about the previous release). Both the “Only One Will Die” and the title track come to mind as some of the more brutal, high-speed efforts, recalling straight forward thrashings like “Demented Aggression” or “Devoured By Vermin”.

Cannibal Corpse is somewhat multi-dimensional for a death metal band though. The obligatory crushingly heavy song comes in the form of “Code of the Slashers”. Again, it doesn’t quite live up to the standard of “Scourge of Iron”, but to the song’s credit, it does later increase the tempo to more appropriate speeds. The band’s technical side seems somewhat restrained this time around, but “Firestorm Vengeance” is the best example. It reminds strongly of “Intestinal Crank” with its offbeat time signatures in the chorus. Yet another dimension of the band is their ability to get dissonant in a melodic way. This album’s contribution to that side of the band is “Shedding My Human Skin”, which lets some notes ring out in its chorus to great effect.

From an individual performance standpoint, “Red Before Black” is on par with its predecessors. Paul’s drumming continues to take a thrashy approach, opting for limited, yet effective blast beats. Though the album as a whole might not be overly technical, the rhythms that both guitarists and Alex are playing are still off the charts in terms of difficulty and speed. The only member who is slightly different on this record is Corpsegrinder, who has somewhat of a raspier quality to his delivery. His enunciation is still fairly strong, but not quite as clear as in the past. He also doesn’t seem to do as many high-pitched screams on this record, which is not necessarily a problem. Overall, he’s by no means declining, but definitely sounds a little different.


Up to this point, it seems like mostly positives on “Red Before Black”, but side 2 of the record isn’t as strong. It’s certainly not bad, and is very consistent with the band’s work to date, but it fails to stand out. Modern-day Cannibal Corpse is at their best when unleashing catchy choruses (a seemingly impossible task for many of the band’s peers), but the latter half of “Red Before Black” doesn’t aim to do that. Some will undoubtedly prefer this, but it’s not quite what I hope for from the band. At the end of the day, it’s Cannibal Corpse, and if you like them, that’s reason enough to auto-purchase their new album! 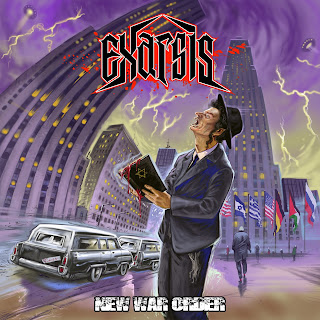 Exarsis is exactly the type of band that is somewhat a victim of their time. If they had been around in the 80s, they would be forever hailed as a hidden gem of the era because of their distinctive sound. Instead, as a modern band, they sometimes seem to give off a cartoonish vibe to their music that likely doesn’t jive for thrash purists. Look beyond the era, however, and you’ll find a band that manages to stand out without radically altering the thrash formula. “New War Order” is their fourth such effort, and while I can’t claim to be overly familiar with their back catalogue, it is a worthy addition nonetheless.

The band’s current fame is somewhat due to their erratic singer. High-pitched vocalists are not uncommon in thrash, but this guy is completely off the rails. He switches between an underdeveloped harsh vocal, and totally insane air raid siren screams. Much of his lines are delivered in the latter style, though he switches between the two seemingly at random, making for an even more out of control sound. If you can’t deal with 40 minutes of a Greek madman shrieking at you, Exarsis is not the band for you.

With this in mind, it’s easy to lose sight of the music, but Exarsis excels in this realm too. They don’t reinvent the wheel, but they opt for a rhythm-intensive brand of thrash that would put even the most experienced riff gods to shame. The band’s guitarists love throwing gallops into riffs, making even the simpler riffs more complex. The band has little patience for anything other than thrash, rarely slowing down or letting up. The result is a series of songs that hit incredibly hard, causing immediate whiplash.


“New War Order” wouldn’t be complete without all of the other staples of thrash. Gang vocals are in high supply, though they are admittedly outclassed by any of the frontman’s shouts. Social and religious commentary is likewise prominent (both the album cover and the song titles should give that away). As always though, it is the quality of the riffs that matters most, and Exarsis has no shortage of great riffs. The songs have their memorable moments, but as the band’s sound is one-dimensional, the real value comes from the unrelenting thrash assault. Regardless, Exarsis is so effective at creating musical mayhem that “New War Order” is an essential purchase for all modern thrashers!