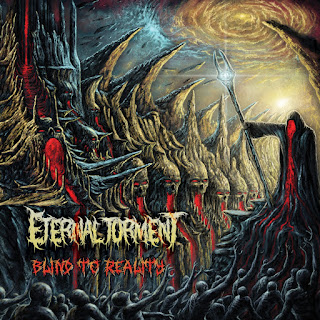 As 2017 winds down, Australia’s Eternal Torment is set to release their debut full-length “Blind To Reality”. This is a short offering of death metal that often straddles the line between brutal death metal and more traditional death metal. On the side of the former sound is the band’s vocalist, who has an inhumanly deep voice. He belts out crushing gutturals with little variation in pitch, aiming for the lowest sounds possible. Despite this, it isn’t overly difficult to understand him (as far as death metal vocals go) most of the time. Aside from the vocals, Eternal Torment occasionally utilizes classic brutal death metal tropes, like slow palm-muted breakdowns. The consecutive outro to “Depose” and intro to “Black Blood” are two of the better examples, but the band isn’t afraid to throw in these sections on any track.


When they aren’t offering these crushing sounds, Eternal Torment does everything else you’d expect of death metal. Tremolo picking, blastbeats, and double bass are all in endless supply. None of them are done in any unique way, making much of “Blind To Reality” a blur. To the band’s credit, the production is on the stronger side (without overdoing it), ensuring that no instruments get lost throughout the album. Every single bass drum hit feels like a blow to the chest, even amidst any other chaos that is happening (with the intro to the title track being the best instance). And this is really what you have to enjoy about “Blind To Reality”: it’s not going to blow you away in terms of songwriting or memorability. It has to get by on sheer brutality, and while thousands of others have done it before them, Eternal Torment does enough that you can throw this release on and enjoy it. It’s not going to win any year-end awards (especially with a December 22 release date), but is serviceable enough to listen to.

Final Rating
3.3/5 or 66%.
at 7:16 AM
Email ThisBlogThis!Share to TwitterShare to FacebookShare to Pinterest
Labels: 2017, Australia, Blind To Reality, Death Metal, Eternal Torment