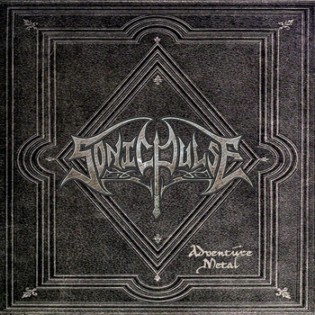 Sonic Pulse is from the incredibly metal-rich scene of Boston, Massachusetts, and offers up something a little bit different from most of their thrash-oriented peers. This band’s take on metal combines the incredible technical virtuosity of Dragonforce alongside a more traditional power/thrash sound. All three songs on this EP display a level of talent that will make you want to quit whatever instrument you might play, but Sonic Pulse doesn’t rely solely on shredding, as there are quite a few decent riffs throughout the EP. The production unfortunately is not as clean as one might hope, making the excessive guitar work a little difficult to discern at times. Nevertheless, the playing is tight enough to make up for this issue.

All three songs on “Adventure Time” are relatively similar in terms of sound: speedy tempos, lightning-fast guitar work, occasional stunning bass playing, and relatively competent, but unspectacular drumming. The vocals are shouted and definitely take influence from many old-school thrash bands where the guy who could shout the best was the singer. This approach is particularly effective because it provides contrast to the high-pitched melodies that the guitars frequently play.

As the EP soldiers on, the songs continue to get longer. This does not deter the band; in fact, the 8-minute closing track is every bit as good as the first two. Although there are some clear choruses on these songs, it would be nice to see the band work a bit more towards memorability. Nevertheless, this release rages all throughout, and fans of particularly guitar-driven work will definitely enjoy it. As an aside, Sonic Pulse is far more potent live than on the record. If they’re coming near you, go see them and prepare to be amazed by their technical prowess! 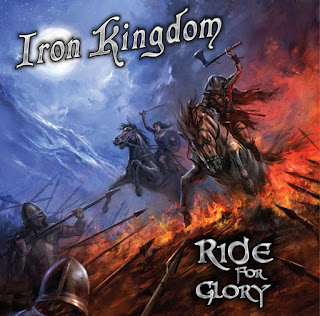 Iron Kingdom hails from the Western shores of Canada, and is a relatively new heavy/power metal group. “Ride For Glory” marks their third album in just 5 years, and is a serious offering of intense riffage and majesty. Though the core influence of all bands in this style appears to be Iron Maiden (and Iron Kingdom is no exception), it would be more accurate to say that the band’s sound derives from USPM groups like Omen or Manilla Road. The music is always charging and rumbling as the band unleashes a large number of furious riffs. Everything about this release screams classic, and there isn’t a shed of influence from anything post-1985 on this album.

The distinctive element of Iron Kingdom’s approach is their vocalist. He sounds like a more metal version of Geddy Lee (Rush). Most of the notes he hits are insanely high, and he has a really similar tone and delivery to Lee. In general, this sound tends to be quite effective, though there are times where it becomes more annoying than enjoyable (such as in the chorus of “Leif Erikson”). Though the vocals can occasionally be grating, Iron Kingdom has numerous lengthy instrumental sections that are often centered around galloping harmonies and awe-inspiring guitar solos.

One area where Iron Kingdom excels is in the rhythm section. While neither the bass nor the drums are overly technical or flashy, they are incredibly powerful and do an excellent job supporting the music. The bass tends to pop out with Steve Harris-esque fills whenever the guitars are harmonizing; otherwise, it gallops along like a stampede, never letting up. The drums likewise provide the backbone to this commanding sound (one listen to the intro of “The Samurai” should make that clear quite quickly). Guitars are often the driving sound of metal, but that couldn’t be further from the truth for Iron Kingdom. On this album, the guitars provide diversity and excitement, but it is the rhythm section that is the reason this album hits so hard.

As good as “Ride For Glory” is, it is not immune from criticism. As mentioned earlier, the vocals can be a bit nerve-wracking, but this is particularly evident in some songs where there are just too many lyrics. This is a case where less is more in terms of vocal delivery. The other difficulty this album occasionally has is that it isn’t memorable from start to finish. There are a lot of really good songs here, and even the songs that don’t have a catchy chorus are littered with interesting parts, but it’s difficult to justify throwing this on instead of “Battle Cry” when you could be singing along to “The Axeman”, as one example. “The Samurai” is definitely the band’s strongest effort, and definitely shows promise for the future. Nevertheless, this is a young band that is clearly quite productive, and it is likely they will only get better over time. “Ride For Glory” has a lot to offer, and will appeal to all fans of blue-collar USPM! 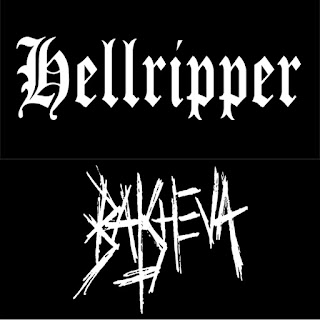 Hellripper, a blackened speed metal band from the UK, has joined forces with the more straightforward American black metal group Batsheva to release a short split. Hellripper’s side is up first, and despite offering just two tracks (and only one original), it is a solid effort. Both songs follow a relatively similar template, as they’re driven by old-school sounding speed metal riffs that are charged up just a bit more than they would have been in the 1980s. The vocals are completely savage, and are the aspect of the music that really shows the black metal influence. In addition, Hellripper’s lead playing shows a lot of Motorhead worship. Although the shredding can get a bit faster at times (particularly the intro solo on “Hell’s Rock n’ Roll”), the approach is ultimately quite bluesy. The overall goal of this side of the split is to make something with a quick, powerful punch, and Hellripper succeeds. The only even slightly negative comment I can make is that the cover song really sounds no different from the other song on this side of the split, aside from being a bit faster.

Side 2 of this split belongs to Batsheva, and you’ll notice quite immediately that it’s a jarring change. Make no mistake, these two bands have pretty much the opposite philosophy. Batsheva’s music is built more around atmosphere than riffs. In fact, the opening track, “Liturgy of Endless Night”, is a 2-minute instrumental that attempts to set the mood before the carnage begins. Once Batsheva’s side of the split really gets going, it is certainly a good effort. Tremolo picking is in full effect, alongside completely demonic and ghoulish vocals. The band switches up the feel of the music often, moving between more rocking mid-paced beats and slow blasting sections. This will definitely appeal to anyone who worships the Norwegian scene of the early 1990s, though Batsheva is not quite as distinctive as many of the bands from that time.

Overall, this split is an interesting, but worthy purchase. It is a bit puzzling as to why the band’s released this together, since their fanbases may not overlap perfectly. Regardless of this fact, anyone who enjoys black metal vocals can find something worthwhile on both sides of the split, and fans of extreme metal in general are likely to get something out of this release. 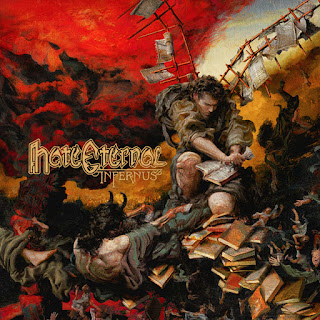 Throughout his career, Erik Rutan has done a lot of great for metal. In addition to producing an endless number of killer metal records (including 3 of Cannibal Corpse’s best), he played on some great records with both Morbid Angel and the lesser-known Ripping Corpse. For some reason, his immense amount of talent has never appropriately shifted to his main project, Hate Eternal. To be fair, there is no shortage of impressive musicianship in the band; in fact, pretty much everyone to ever be in this band is an absolute monster. The problem lies in the songwriting (or lack thereof), and occasionally the production.

The good news is that the band’s new album, “Infernus”, actually sounds far superior than their previous album. The only real production flaw is that the drums are a bit too loud and occasionally drown everything else out, but that can be attributed more to the fact that they’re almost constantly playing blast beats. Sure, the madness of 45 minutes of blasting is part of the charm of Hate Eternal, but it is also the reason why the band struggles to create a record worth revisiting. It is difficult to pick out any favourite riffs because everything else surrounding the riff is monotonous. To be fair to Hate Eternal, this is perhaps a slight over-exaggeration of “Infernus”. There are certainly moments without blasting (the epic, pounding, Morbid Angel-esque title track comes to mind), but it is definitely the largest barrier to entry with this album. Even comparing them to a similar band like Krisiun is difficult because the latter band is able to create something much more compelling musically in spite of the sonic assault on drums.


“Infernus” is not a bad record, but it is plagued by bad choices. Namely, the complete lack of memorability, alongside the relentless blast beats make it difficult to even put forth a highlight. Erik Rutan outshreds many of his contemporaries here, but unfortunately that cannot save this record. It certainly isn’t bad for something to throw on and release some rage to, but as a creative effort, it falls below many of its peers.