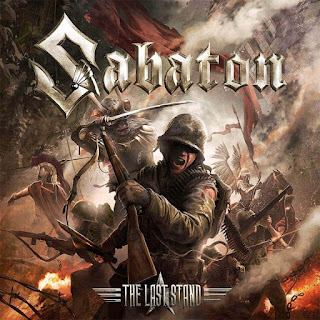 It seems like most of the big names in power metal have been set in stone for years. With very few exceptions, the last number of years have not risen many new bands to a level that can compete with giants like Helloween, Stratovarius, or Avantasia. And while Sabaton certainly cannot be considered new, their debut is much more recent than many of these other acts. For this reason, it is astounding just how quickly their popularity has skyrocketed over the last few years. It seems like they really took off around “Carlous Rex”, and each subsequent album promises to be bigger than the last.

This brings us to “The Last Stand”, which has been hyped beyond belief by Nuclear Blast. To their credit, this is a great album. The label made some major mistakes in terms of promoting it (more on that later), but this is Sabaton’s strongest album since the brilliant “Coat of Arms”. Let’s get one thing out of the way quickly: this band gets more and more derivative on each record. Sometimes you feel like a melody before, but this record has a few too many of those moments to be comfortable. This is mostly because Sabaton’s formula never changes. The only real change is that the guitars seem to fade further into the background on each release, while the keyboards get louder. Both of the first two songs, “Sparta” and “Last Dying Breath”, emphasize this change in focus with their monstrous choruses (the latter of which might be a top 5 Sabaton song ever).

The choruses tend to be the focus of this album. A lot of songs start out exciting and mellow out into a verse driven by Pär Sundström’s bass playing, only to build up into an immense chorus. Every song is so catchy it hurts, which works both in the band’s favour and to their detriment. Tracks like “Shiroyama” and “Rorke’s Drift” push the boundaries of memorability. If you don’t want to sing along to these songs, something is seriously wrong! Where this uncanny ability to writing catchy melodies hurts Sabaton is when the songs just aren’t that good. “Blood of Bannockburn” is the only truly weak song on the record (unsurprisingly, it was promoted as one of the singles). This track has a Celtic melody driven by bagpipes. Ironically, it actually has a killer riff underneath, but it is a little too drowned out. Fortunately, this song is a grower, and gets better with each listen, but it still stands out as a weaker moment. Another one of the singles, “The Lost Battalion”, is yet another grower, but it works much better in the context of the album, where it is preceded by a short narration from Jon Schaffer. This song is also notable for the fact that the drums were replaced by gun samples, making for an even more epic sound!

Those two tracks are definitely head-scratchers the first time around, but the remaining songs on the album are all fantastic. Relative to “Heroes”, this album features a lot more upbeat and energetic songs. As great as Sabaton’s previous record was, it did feel a bit lifeless at times, but there aren’t any songs on this album that feel sluggish, dull, or uninspired. Even if they aren’t unleashing their best melodies, Sabaton is providing something enjoyable.

One factor working in the band’s favour is the improvement in the guitar playing. On their second record together, Thobbe Englund and Chris Rörland sound a lot more comfortable together. Their shredding is much wilder and more impressive. Even with their older lineup, Sabaton was never really a shreddy band, instead opting for simpler, melodic solos. On “The Last Stand”, however, that has changed. This is a major improvement because most of their contemporaries have solos that are a lot more technically challenging, so it helps the band keep up, and because Sabaton’s music is already fairly simplistic, so this makes for a more diverse and less predictable experience.


There are few bands that are as true to their original sound as Sabaton. As uninventive as they have been over the last few years, it is difficult to deny how proficient they are as songwriters. Their formula has been perfected into short 3-minute bursts of energy. They are essentially a pop band in disguise at this point, and while that might not work for a lot of metal fans, it is easy to see why so many people love this band. If I want something more challenging, there are any number of bands to listen to, but as an exercise in fun, catchy music, Sabaton is second to none! 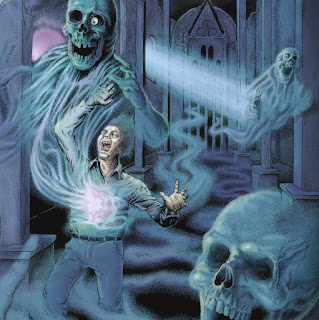 It might be 2016, but the art of the 4-way split is not dead! Unspeakable Axe Records is keeping things alive with their second such split in a relatively recent period. This release once again sees 4 death metal bands from a variety of backgrounds coming together to create a unique offering of crushing brutality.

The first band up is Gatecreeper. If you worship Entombed, Dismember, Unleashed, and the like, this is going to be the band for you. This band’s riffs crush posers by being as downtuned and crunchy as possible. If the HM2 pedal is not in play here, then Gatecreeper has found an impressive imitator. Though the band does spend quite a bit of time in plodding mid-paced territory (which is where they are at their heaviest), they speed things up after a couple of minutes to give your neck a faster workout. Even as someone who never got that much into Swedish death metal, Gatecreeper hits a very satisfying spot.

Expectations for this release should be pretty high after the first song, and the good news is that Homewrecker still manages to annihilate them. Make no mistake, “Perpetrators of Annihilation” is far and away the best song on this release. It has everything to offer in terms of speed, but where it truly sets itself apart from the rest of this split is near the end when the band launches into a spacier, atmospheric section. These moments overlap clean guitars with huge, distorted ringing notes. The bass climbs higher into the mix at this point, creating a dark, disturbed atmosphere. The end result is terrifying, but incredibly enjoyable. While it goes on for quite a while (the track does break the 6-minute barrier), it is a hypnotic trance that is easy to get lost in.

The third slot on this record is an unfortunate one because nobody is living up to Homewrecker’s song. Outer Heaven, however, does a decent enough job. The song opens with a riff that, if tuned slightly higher, would feel pretty close to an old-school Floridian death metal riff (think: Death; the track is named “Death Worship”, after all). This song quickly changes into a more predictable Swedish-esque sound. For the most part, this track is well executed, but the band’s vocalist is far too low in the mix. Nevertheless, this doesn’t hurt Outer Heaven too much, and “Death Worship” is a serviceable track for this split.

Scorched closes out the record in a slightly different direction. “Autopsy Incomplete” opens with the shrill sounds that one would expect in a horror movie. The vocals eventually come in, with the band providing only a partial accompaniment, and the result is pure terror mixed with brutality. Once the band comes in for real, Scorched still manages to keep that petrifying vibe for quite a while, before exploding into a more typical death metal song. This song has some fun syncopated rhythms to it, and is definitely a lot different from the Swedish death sounds of Gatecreeper and Outer Heaven.

All in all, this 4-way split is another rousing success for Unspeakable Axe Records. Each of the 4 bands definitely has something interesting to offer, and while only Homewrecker pushes the limits of the subgenre, this release is enjoyable from front to back. The EP format definitely works better than the full-length for this style of split. Ultimately, if you’re a serious fan of discovering new death metal bands, this split is an essential purchase! 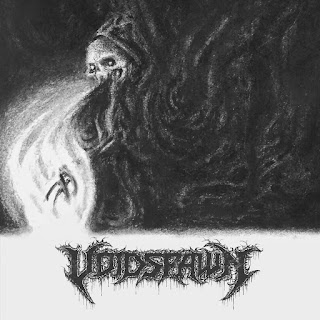 It seems that the death metal scene of 2016 is dominated by bands that emphasize strange, dissonant, and occasionally cavernous music. The legions of groups playing this style draw considerable influence from their forefathers in Immolation and Incantation (among others), but still usually do a decent job of carving their own niche and avoiding being predictable. Voidspawn is no different in this respect. While many of their peers achieve dissonance via strange or incompatible chord progressions and spacey atmospherics, Voidspawn takes things in a different direction (though they definitely use those abstract intervals as well). This band achieves much of its dissonance by letting notes ring out, despite being completely drenched in distortion. They’re obviously not the first band to do this, but in the current scene, they stand out for using this sound fairly consistently, as demonstrated constantly on the opening song “Sisyphean Ideation”.

Of course, there’s more to Voidspawn than simply letting notes ring beyond their expected lifespan. The album features plenty of downtuned, crushing riffs that will obliterate the mind. Additionally, the vocals are monolithic and provide more than sufficient brutality, despite being somewhat back in the mix. The production as a whole occasionally feels distant. The guitars dominate the other instruments (a welcome change from most records where drums are the domineering force), meaning that it will never be difficult to discern the riffs being played, but every other instrument is less prominent. Voidspawn also tends to mix up the tempos fairly often. The general speed of the record is obviously high, but they aren’t afraid to go into a doomy passage, or even pull out some longer chords in between more chaotic riffing.


“Pyrrhic” is a relatively short experience, as it just barely cracks 13 minutes. It might be difficult for a band to build an identity for themselves in such a short time, but Voidspawn has pulled it off. This EP has plenty of variety, but still has a distinctive sound, while staying true to what so many people love about death metal. This release certainly isn’t a crowning achievement in terms of memorability, but this type of death metal rarely is. On the whole, Voidspawn will more than satisfy any cravings you might have for dark dissonant death metal, and the fact that they can do it in such a short timespan is a testament to how truly talented the band is!