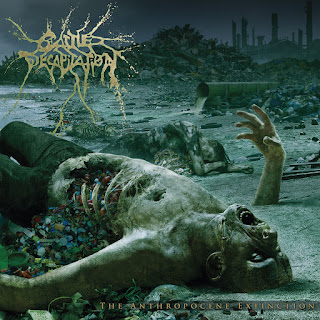 In 2012, Cattle Decapitation released a monumental record for death metal: “Monolith of Inhumanity”. Even for someone such as myself, who rarely gets hyped over non-OSDM-sounding death metal, this album was incredible. Just a few years later, the band is back with a follow-up record, “The Anthropocene Extinction”, which attempts to live up to high expectations. While at times the band meets those expectations, they also fall short at other times. This album is not radically different from its predecessor. The only major change is the “clean” vocals that singer Travis Ryan previously employed are now present a lot more often. While some may criticize this as the band getting predictable or formulaic, it is a welcome move to me because it makes the songs a lot more distinctive. It helps that those vocals are also incredibly interesting because they’re a lot more nasally than most singers.

Both the major strength and major weakness of this record as a whole is that it doesn’t feel like the band developed too much from the last record. On the one hand, both albums are exemplary offerings of death metal, but on the other, “Monolith of Inhumanity” felt like such a step forward, that it makes this album feel a bit stagnant. Nevertheless, you can’t fault Cattle Decapitation for knowing what they do well. One of the only areas that is something pretty cool and different on this album comes from “Clandestine Ways (Krokodil Rot)”, where the band’s drummer, David McGraw, breaks into an AC/DC-esque rock and roll beat, and the rest of the band joins him with a similarly styled riff. This moment is a nice break from the barrage of hyperspeed blasting and double bass that is present on the rest of the record (to be fair to McGraw though, he doesn’t overdo those elements like most over death metal drummers, he’s just incredibly fast with both of them).

“The Anthropocene Extinction” is a monument to great performances in metal. The drumming has already been mentioned, but as always with Cattle Decapitation, Travis Ryan steals the show. Not only are his cleans great, but his death metal range is unparalleled. He can do it all and make anything sound fantastic. The guitar and bass playing both manage to keep up with the rest of the rhythm section, and the guitars are often able to add their own bits of melody, particularly in the chorus sections to complement the clean vocals. Though this album doesn’t have any riffs that rival the epic “Your Disposal” from the last record, it is still an impressive offering of death metal. If you loved what Cattle Decapitation did on their 2012 offer, “The Anthropocene Extinction” will be a perfect match for your tastes! 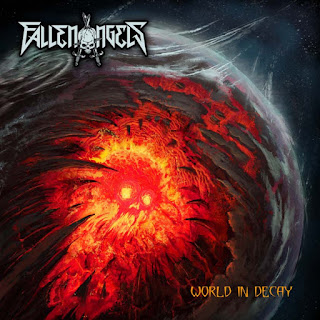 Fallen Angels is a thrash band that is based out of Seattle, Washington, and is releasing their third album, “World In Decay”, in 2015. Despite the recent surge of popularity for thrash, this is a band that fell through the cracks for me, having never even heard of them until this album came along. If their old material is anything like this album, that was a mistake, as “World In Decay” is an excellent offering of thrash. Fallen Angels is not the heaviest or fastest thrash band out there, but they are very skilled songwriters, and extremely competent musicians as well. “World In Decay” would fit well in the Bay Area scene of the 1980s, when there were a lot of distinct bands that were able to put their own spin on thrash. Much like those groups, Fallen Angels’ approach includes a heavy dose of melody. While this is presented by both the guitars and the vocals, the bass playing is actually where a good chunk of the melody is present. Fallen Angels’ bass player always has an interesting line for you, often times independent of what the guitars are playing. In fact, his style is very reminiscent of Cliff Burton’s bass playing, where the bass lines would pop out as needed, and perfectly complement the music.

One of the reasons “World In Decay” is so enjoyable is because it feels very deliberately crafted. The band knows how to take advantage of common thrash tropes and apply them in ways that don’t sound cliché, but are still incredibly effective. Their songs are memorable, in large part because they don’t sacrifice catchiness for extremity. Fallen Angels is willing to experiment in a variety of ways, such as on the intro of “Forsaken Existence”. This song opens with some acoustic guitars mixing with distorted ones, and then enters into some fantastic power metal-esque leads before finally erupting into a thrasher of a song. Additionally, quite a few songs on this album make use of riffs that have strong punk influence.

Nearly every track on this album could be considered a highlight, but my favourites are “Fire At Eden’s Gate” and “Into The Abyss”. The former song is great because it opens with a mini-bass solo, and also has some impressive lead guitar soloing later on. “Into The Abyss” is not only the most memorable song, but its galloping pace is also very headbanging inducing. On the whole, “World In Decay” is a very impressive album, thanks in large part to the stellar musicianship and attention to detail in the songwriting. Hopefully this album breaks the band through in a much bigger way, because they are deserving of a lot of attention based on this album!

Highlights
"Fire At Eden's Gate"
"Into The Abyss"

at 10:44 AM No comments:
Email ThisBlogThis!Share to TwitterShare to FacebookShare to Pinterest
Labels: 2015, Fallen Angels, Thrash Metal, USA, World In Decay

Anachronaeon – The Oracle and the Keyholder 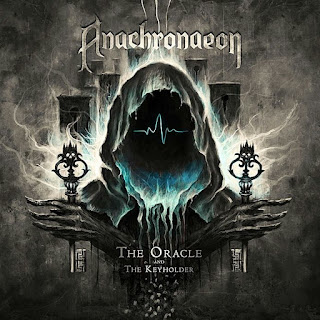 With four albums under their belt, Anachronaeon is a melodic death metal from Sweden that unleashed their fifth record, “The Oracle and the Keyholder”, in early 2015. Despite the title, Anachronaeon is a band that can turn up the heat when needed; in fact, the beginning of this record starts out with some serious death metal stylings (no melody). Throughout the record, the band seamlessly switches between insanely brutal moments, and a more traditional melodeath sound. Additionally, Anachronaeon’s vocalist comes from the school of Johan Hegg; his voice is thunderous and deep. It is relatively easy to understand, which usually is a good thing, but occasionally the band’s lyrics can be a bit on the weak side (“I Was Failing To See” being one example that comes to mind).

Throughout the record, there are definitely some interesting things that the band does to separate themselves from the pack (both good and bad). On the intro to the aforementioned “I Was Failing To See”, they offer up seriously brutal riffs with lots of speed that far exceed was most melodeath bands are doing before transitioning into more of a black metal riff. At other times, however, they get a bit too ambitious. On songs like “Flowing Like An Ocean Of Grief To Be Framed” and “Her Words Pierce My Heart”, there is just too much going on at times (if the song titles didn’t give it away, the music is similarly convoluted on occasion).

As with most melodic death metal bands, Anachronaeon experiments with clean vocals towards the end of the record. And like 90% of melodeath bands before them, it just doesn’t pan out that well. They aren’t terrible, but the band’s growling is so good that it’s just unnecessary. I definitely appreciate the attempt at experimenting, but it feels forced.

Though I’ve been a bit critical above, it’s fair to say that “The Oracle and The Keyholder” is a pretty good record. The band goes beyond simply copying what is around them, and instead takes a variety of influences and combines them into an enjoyable package. This album will definitely appeal to big melodic death metal fans, but for only casual listeners of the subgenre, it may be a skip. Any bass players out there will also really dig this record because the bass playing is top-notch, with plenty of interesting bass lines.

Highlights
"I Was Failing To See"

at 8:53 PM No comments:
Email ThisBlogThis!Share to TwitterShare to FacebookShare to Pinterest
Labels: 2015, Anachronaeon, Death Metal, Melodic Death Metal, Sweden, The Oracle and the Keyholder 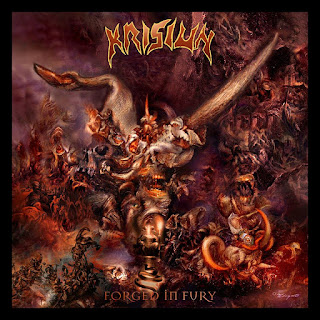 It has been four years since the last death metal opus from Brazilian legends Krisiun. “Forged In Fury” marks the bands 10th full-length record, and it is an impressive effort in continuing the band’s unrelenting hate-filled legacy. Make no mistake, this album is not for the weak. Over the course of 51-minutes, these three brothers unleash every single riff in their arsenal and leave every neck sore. Though their recent records have delivered the same point in equally compelling form, Krisiun is a band that is essentially going to bludgeon you over the head continuously with brutality. The drumming in particular is quite maniacal, as it makes extensive use of blastbeats (not to the point of ad nauseam, but certainly a lot). As you might expect, double bass is also very prominent on this effort, and Krisiun’s drummer ends up putting on an absolute clinic in terms of endurance and aggression.

The rest of the performances fall in line with the drumming. Riffs travel a mile a minute, and are often tremolo-picked. The bass playing isn’t as loud as I’d like, but that’s because it is usually being drowned out by an insanely heavy riff or blasting. Surprisingly, the lead playing feels a bit more melodic than what I’d expect from Krisiun. The most prominent example is the beginning of the opening track “Scars of the Hatred”, but it does show up as well in songs like “Strength Forged Fury”. Krisiun’s vocalist is as brutal as ever. If you put in a bit of effort, you can make out a good deal of what he’s saying, but that’s not particularly important on this record.

While I’m a big proponent of memorable songwriting, this is the style of album where it becomes less important. There isn’t much that will stick with you after a listen of “Forged In Fury”, but that’s likely because your skull will be smashed into several pieces. The band delivers such an enthusiastic performance that it doesn’t matter whether or not you can match certain riffs to each song. Long-time fans will love this album, and newcomers to the band should be instantly convinced: “Forged In Fury” is a definite purchase!