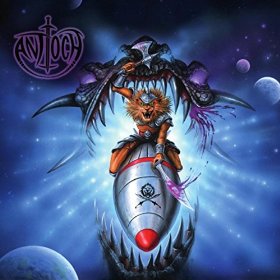 Off the heels of an excellent EP that was released last year, Canadian heavy metal band Antioch returns with “Antioch II: First Strÿke”. This shows the band take a distinct step forward both in terms of forging their own identity and their level of Judas Priest worship (somewhat of a contradiction, but it rings true on this record). From the opening scream of “The Strÿker Rides” (which is a great up-tempo opener in the vein of “Rapid Fire”) you know you’re in for something inspired by the Metal Gods. The band’s vocalist, Nicholas Allaire, has his own interesting mid-range voice that sounds nothing like Halford, but he also does an excellent job emulating the high-pitched, almost growly vocals that were prevalent on "Painkiller". Though the vocals are impressive, they would benefit from being mixed a little more loudly.

Musically, this album also follows the path of the Priest. In particular, the record is based around the “Screaming For Vengeance”/ “Defenders of the Faith” era, which was filled with incredibly hard-rocking riffs (admittedly there are exceptions, such as the "Painkiller-influenced "Venomspitter"). “Iron Serpent” is one of the best examples of this, as it is driven by a strong beat, alongside a catchy, anthemic chorus. This song is definitely the best on the album because it sounds like it was written to close out their live shows. In other words, it is high energy, easy to sing along to, and overall is a lot of fun. After these first two songs, the quality of the album takes a serious dip. Everything sounds passionate and competent, but the remaining songs lack the hooks that the first two songs had. “Enhammered” shows a lot of promise in the chorus because of the way it intertwines Allaire’s singing with backing vocals, but the remainder of the track does not stick out.

Another difficulty with “Antioch II: First Strÿke” is that the production isn’t the best. I’m no advocate of the loudness war, but this album would benefit from being a bit louder and better mixed. There are a lot of interesting things going on at any given time, but the production doesn’t really highlight that. This might even be a case where adding another guitar track or two to beef things up would make a substantial difference. Overall though, it does feel like the band has gained a bit of an identity with this album. Even though it is firmly rooted in the Priest-worship category, there are not many bands that emulate that 1982-1984 sound so convincingly, and with a bit of refinement in the production and songwriting, Antioch is likely to turn a lot of heads. 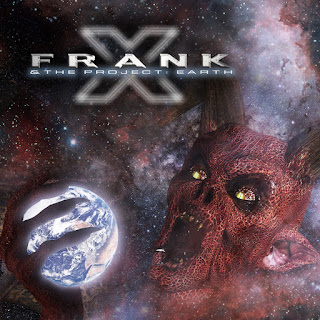 “The Project: Earth” is a concept album by Frank X that features a whole cast of interesting characters and sounds. Upon first listen, this album is strange. Unlike most strange things I come across, however, this is strange in a good way. It’s filled with interludes featuring dialogue that advances the story, and these passages occasionally even spill over into the musical tracks. The good news is that even if you don’t follow the story and are just listening along to these tracks, there is still quite a bit of humour in them. The acting isn’t exactly phenomenal (closer to early Rhapsody than later Rhapsody in terms of spoken word), but it fits the comical nature of the album.

Of course, the main focus of this album is the music, and it is definitely interesting in its own way. In general, it tends to lean towards traditional heavy metal with the symphonic vibes used to enhance the atmosphere and story of the album. In many respects, “The Project: Earth” could be likened to a mid/late-era King Diamond album, where a charismatic, albeit odd vocal performance carries music that tends to be less riff focused. Frank X’s vocals are more than sufficient on this record; he doesn’t offer a particularly wide range, but instead uses his haunting voice to enchant the listener. Many parts of this album sound more like a ritual or conjuring.

Unlike Queensryche’s great concept album, “The Project: Earth” is not a record with individual standouts. In fact, the earlier comparison of King Diamond’s 90s and 2000s career still holds because the album as a whole is incredibly consistent and enjoyable, but its success is due to its cohesion. Many of the tracks are consistently pounding and heavy, but without fast crazy riffs. This means that the near-hour runtime will be an enjoyable experience, but there is not a ton to cling to afterwards.

“The Project: Earth” is an ambitious release, and while Frank X’s vision has been mostly realized, it is not without flaws. One problem is that the mixing between the 100% spoken tracks and the music is not perfect. It’s better than on most other records that intertwine the two, but the acted tracks feel a bit quieter than the music. These sections also give rise to the other issue: they’re simply too frequent. While they can be quite funny, the interludes tend to be more successful when they’re mixed directly into the music. As this album exceeds 56 minutes, it’s already rather lengthy, and having a 4-minute intro with no music, for example, is a bit over the top.


On the whole, these criticisms are easily ignored because the execution on this record is incredible. Concept albums are always ambitious, and comedic ones even moreso. Frank X manages to combine the two in a unique way, while showing homage to an artist like King Diamond, and ultimately create an interesting product. As someone that normally shies away from this sort of thing, “The Project: Earth” was a pleasant surprise. 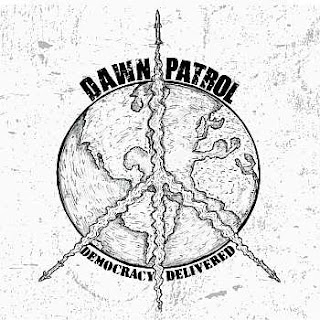 Borrowing their name from one of Megadeth’s greatest tunes is American thrash band Dawn Patrol. After putting out a couple of EP’s, the band unleashed their first full-length, “Democracy Delivered”, in mid 2015. The best description of this album would be that it’s a thrashier, more metal version of Post Mortem’s “Coroner’s Office”. That’s an awfully specific reference, but many of the same elements are present: strange jazzy interludes, somewhat hardcoreish vocals (Dawn Patrol’s admittedly are thrashier in nature though, but they do bring in some gang shouts, particularly in “Another Useless War”), and short, but intense songs. These somewhat avant-garde jazz sections are few and far between, but appear often enough to be a distinguishing factor of this record, as they usually feature some clean guitars playing weird patterns (certainly uncharacteristic for thrash!).

Of course, the main point of “Democracy Delivered” is to thrash, and that’s just what the record does most of the time. The riffs are relatively standard, showing great homage to the Bay Area sound. Unfortunately there aren’t any riffs that stand out (other than the opening riff to “1984"), largely because the band takes an unmelodic approach. To be fair though, nothing on here sounds like a groove or half-thrash riff; everything is presented at full speed and would be sure to rip your neck off in a live setting. The aforementioned “1984” is definitely the best song on the record, as it provides hooks alongside the thrash. Towards the end of the album, the band's punk influence becomes more prevalent and provides a nice contrast to the earlier half of the record.


Part of the difficulty with “Democracy Delivered” is that the production doesn’t do the album any favours. Even though it doesn’t sound outright bad, it does sound one-dimensional, making the album a blur. The fault doesn’t really lie with the songwriting. The title track for example will have you screaming along after just a single listen, but in the context of the album, you really have to pay attention to differentiate these songs. This is likely just one of those records that you need to turn up really loudly to appreciate because it doesn’t sound quite right at lower volumes. This is one of the few times where I’m at a bit of a loss as to what the real problem is. All of the elements are there, but somehow, “Democracy Delivered” just doesn’t deliver. Again, I’d put most of the blame towards the production because the band truly does have some impressive chops. Dawn Patrol is definitely a band to keep an eye on, and with better production, their second album will likely slay all those who oppose.