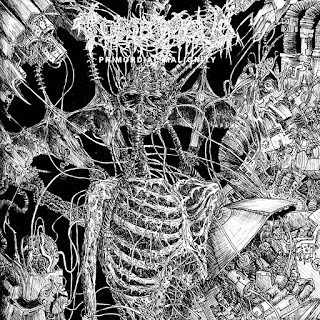 Every year, there are always a handful of “hype” bands amongst the underground metal crowd. And while they often fall in subgenres that I enjoy but do not love, these bands usually end up being quite worthy of praise. One of the earlier examples for 2017 is Canadian death metal group Tomb Mold. “Primordial Malignity” is their debut album, and runs just over 30 minutes. For once, however, I’m not seeing the hype with this band. To their credit, they are authentic in achieving the sound they wanted to create. The riffs are bouncy, and remind one of Finnish old-school death metal groups. Switching between higher speed and sections and doomier passages with ease, Tomb Mold doesn’t restrict themselves to just blasting away.


But despite the professional output, Tomb Mold just isn’t that good. The guitar tone is weak and lifeless, the songs are totally unmemorable and devoid of anything interesting, and the album isn’t as fast as I’d like. As a mindless death metal record, it gets the job done, but compared to the groups the band worships, Tomb Mold falls very short. “Primordial Malignity” feels like a very standard death metal album. There’s no unique edge, which wouldn’t normally be a problem, but the music already feels so lifeless that it makes the album a dull, repetitive experience. If the band had a wickedly sharp guitar tone, or even some adventurous bass lines, there would be more merit, but as it stands, Tomb Mold is just one of the crowd. People talk about retro thrash or modern traditional heavy metal as being stale and inoffensive, but at least some of those bands write decent songs. The reality is that those terms describe Tomb Mold far better than they describe White Wizzard.