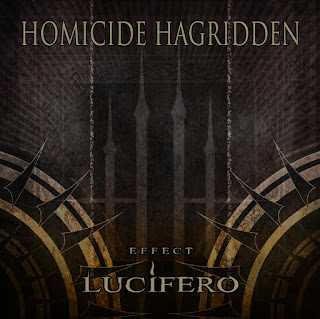 “Effect Lucifero” is the third full-length album from Italian thrash band Homicide Hagridden. While the Italian thrash scene is absolutely bursting with new talent, Homicide Hagridden has been around a lot longer than most of their peers, having formed in the mid 1990s. Fortunately, nothing about their sound reflects the thrash scene of the 90s, as “Effect Lucifero” is a very straight forward thrash album, showing plenty of influence from any number of great, classic thrash bands. In fact, the vocals on this album are quite similar to Slayer’s Tom Araya. The only difference is that Homicide Hagridden’s singer seems to rely a lot more on the upper register. The result is an album that features a ton of really wild yelling. This approach is surprisingly effective because it amps up the intensity all the time.

The one caveat to that comment is that “Effect Lucifero” is only brutal when the band’s vocalist yells rather than sings. There are a couple of tracks (“Lie To Me An Angel” being the main offender) where he tries singing instead. Unfortunately the result isn’t all that good. Not unlike most thrash vocalists, he can’t really sing that well, and would be better off with his harsher approach.

From a musical standpoint, “Effect Lucifero” checks all the right boxes. The production is monstrous, which is particularly evident through the crunchy guitars and punchy bass drum. There is no shortage on riffs throughout the record (in fact, there’s pretty much an overload of awesome riffs), and they run the gamut from straight-up Exo-riffs to more melodic and unique riffs. It also helps that most of the album is speedy and upbeat. The aforementioned “Lie To Me an Angel” is an interesting example; as noted, it does get weird with the focus on singing, but then the second half of the song erupts into something way thrashier, and is a definite highlight of the record.


On the whole “Effect Lucifero” is a well-executed record. It’s not often I think a band would be better if they were more one-dimensional, but Homicide Hagridden is at their best when they ignore experimentation and go straight for the throat. Regardless, the mix of sounds here is interesting, and most of it is still focused on thrash, so this album is a worthy listen! 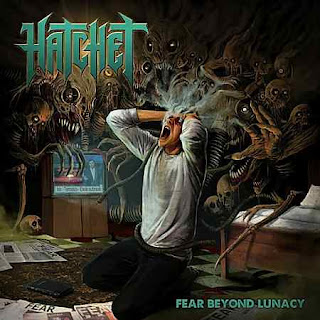 After the lengthy 5-year wait between Hatchet’s debut and sophomore releases, “Fear Beyond Lunacy” crept up quickly. Fortunately, the band instantly makes up for lost time, as “Living In Extinction” starts the thrashing off in a good way after a short intro. Though the band’s approach is fairly standard when it comes to thrash, Hatchet has a very unique riffing style. You can always identify their riffs by the absolutely furious downpicking (with the occasional gallop, as “Living In Extinction” shows), which sporadically culminates with some higher pitched notes towards the end of the riff. Another song where Hatchet obliterates the dreams of amateur rhythm guitarists is “Killing Indulgence”, where the band throws some faster alternate picking into the end of the main riff. While Hatchet certainly isn’t the fastest band around, they’re rhythmically punishing because every song moves at a speedy tempo and does not let up at any point. Whereas the previous album had an interlude in the middle, once “Fear Beyond Lunacy” gets heavy, it simply does not stop.

In addition to the band’s distinctive riffs, they can also be identified by the shredding of mainman Julz Ramos. He makes use of tons of sweep picking, and while none of his solos are derivative of his previous work, he definitely has some common patterns he favours. The band also utilizes plenty of harmonized guitar sections, sometimes in solos (“Living In Extinction”), sometimes just outside of them (“Lethal Justice”), and sometimes in most of the riffs of a particular song (“In Fear We Trust”). Part of the reason that it’s easy to mention so many songs is because Hatchet excels at writing great songs. Even without a metronome, I’m certain that most of these songs are at the exact same tempo, and yet, they’re all distinctive in their own way. “The World Beyond” is a highlight because it shows exactly how gang vocals are best utilized in thrash. “Dead And Gone” is both a complete rager, and extremely catchy.


The hardest song to evaluate on “Fear Beyond Lunacy” is the re-recording of “Frozen Hell”. I’m happy to say that I bought their first album shortly after its release in 2008, and for a long time, “Awaiting Evil” was the only Hatchet I had to listen to. Despite the different singer and weaker production, that record does have its own charm. The re-recording certainly accentuates the improvement in those two areas: Julz is a better singer, and the production is now much thicker and heavier. Still, every time this album finishes, I immediately want to go put on “Awaiting Evil” simply because “Frozen Hell” rules so much. I’d chalk it up to nostalgia, but it doesn’t really matter because Hatchet is 3/3 in terms of putting out great records. “Fear Beyond Lunacy” is as enjoyable as their previous work, and is also a great place to start for anyone new to the band!

at 8:54 AM No comments:
Email ThisBlogThis!Share to TwitterShare to FacebookShare to Pinterest
Labels: 2015, Fear Beyond Lunacy, Hatchet, Thrash Metal, USA 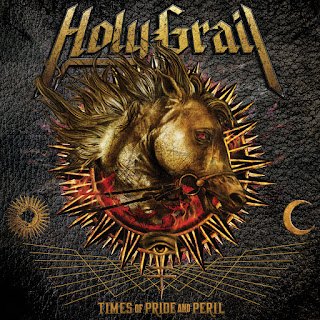 Holy Grail was undoubtedly one of the most interesting and energetic bands to pop up amidst the traditional heavy metal and speed metal movement of recent years. “Crisis In Utopia” remains one of the most truly mind-blowing guitar-oriented records in existence, and the follow-up is similarly stellar. 5 and a half years since the first album, the band is back with their third record, “Times of Pride and Peril”. This album shows a slightly different side; the shred has been dialed back a few notches in favour of a songwriting-first approach. There’s just one problem: the songwriting isn’t as strong as it used to be. Nevertheless, there is a lot to enjoy here.

“Crystal King” kicks off the record, and it shows singer James Paul-Luna going into overdrive mode, as he hits some notes so high that they decimate many power metal vocalists. This is one of the more upbeat songs on the record, which is a major reason why it stands out. There are a few too many tracks on “Times of Pride and Peril” that tend to feel like the band is on automatic mode; a lot of them aren’t all that fast and lack dazzling guitar work (at least compared to songs like “My Last Attack”). At about the halfway point on the record, however, things really pick up. “Descent Into the Maelstrom” is the first track that feels like classic Holy Grail. It is speedy, has tons of intricate soloing, and marks the first truly great chorus of the record (but not the last!). Ultimately, this song rules because it feels like the Holy Grail of old (I’m not inherently against a band evolving, but Holy Grail has two wicked shredders and needs to make better use of them).

The first single that was released, “No More Heroes”, is in line with the band’s previous work. Opening with some nice lead guitar wizardry, this song manages to be both technical and catchy, a rare combination, but one that Holy Grail has achieved effortlessly in the past. “Pro Patria Mori” follows this song, and is another highlight. Much like “Descent Into The Maelstrom”, this is another song where the chorus absolutely rules. Much of the song is driven by a galloping verse until slightly over halfway through the track, where things speeds up, and the band really takes off from there.

To be fair to Holy Grail, this is a record that requires patience and multiple listens. Their sound of old could be dismissed as being superficial on the surface; after all, its strengths are speed and flashy guitar work. Fortunately, however, the band wrote great songs in the past. On “Times of Pride and Peril”, the songs do tend to be growers. “Waste Them All Away”, for example, is a song I didn’t care for the first time around, but once you reach listen four or five, it does tend to stick in your head. This is the case for a number of tracks on the record (primarily the ones that haven’t been mentioned to this point).

Despite the obvious affection I hold for the band’s early works, I’ve never understood the need for harsh vocals. As with 95% of other bands that try to mix clean and harsh vocals, it simply doesn’t work for Holy Grail, and is the primary reason this band has ever drawn comparisons to metalcore (not that there’s anything wrong with that; it just isn’t what I want in speed metal). Fortunately, “Times of Pride and Peril” tones down the harsh vocals further, relegating them to only the final track, “Black Lotus”, which is a 9-minute epic. This is another track where Holy Grail really nailed it, to the point that even the harsh vocals aren’t as frustrating as they’ve been in the past.


So what’s the conclusion then? On the one hand, about half of this album works well immediately, while the other half takes time to sink in. If you’re already a fan of Holy Grail, you’re likely in it for the long haul, and no doubt you will spend plenty of time with this record. As of right now, it ranks as a little bit of a disappointment for me, but I have no doubt my opinion of the record will improve over time.