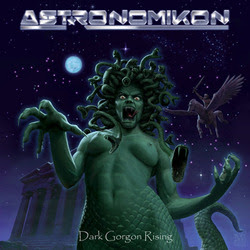 If there is one European country that I have never heard any metal from, it would be Cyprus. Until now, that is. Astronomikon hails from this metal-barren area, and as the first representative of their country, the band delivers enjoyable, unique heavy metal. To call it strictly heavy metal, might be a bit of a misnomer. On the one hand, the band is driven by the powerful vocals of Nicholas Leptos, who sounds similar to Fabio Lione (Rhapsody of Fire). Despite that clear melodic power metal influence, most of the music resembles a progressive USPM band. It isn’t so much the riffs themselves that are impactful, but the way it all comes together that make these songs come alive. The advantage of this style of writing is that it makes most of the songs quite distinctive, and in this case, quite good.

Part of Astronomikon’s appeal is their heavy usage of eastern sounding melodies. Nearly every single track features, at the very least, some obvious Egyptian or Middle Eastern influence. The opener, “Anatolia”, is the most obvious and best example of this sound. The only song that had a very different feel was “For You I Will Die Young”. The opening of this track sounds like it was pulled directly from Rhapsody of Fire. Leptos’ incredible vocals take center-stage as the other instruments provide only rhythmic support. This track also displays Leptos’ unparalleled vocal range; the chorus shows him stretching his voice to the absolute limits. In general, it is Leptos who really drives this record. Although the music is by no means very traditional sounding for metal, this great singer adds another dimension to the music. One aspect I would have liked to see further explored was to add more guitar leads. This is a melody-driven band, but moments like the opening of “Perseas Eurymedon” display how potent the guitar tone on this record is. Only good things could come from more emphasis on the guitars. Most of the other elements of this album are quite standard; as mentioned above, all of the aspects of this record combined are what make it truly worthwhile.

“Dark Gorgon Rising” is certainly an accessible record, but it’s one that will be enjoyed even more over time. The use of melodies is just a little bit different from what you might expect, and the incredible talent with the band accentuates that. It may very well be that having a unique location has helped this band create an atypical sound, but in any case, it is one well worth hearing. All fans of any kind of power metal or progressive music should listen to Astronomikon immediately!

Be sure to check out and like Astronomikon on Facebook!
http://www.facebook.com/astronomikon?fref=ts
Highlights
"The Spell I'm Under"
"Bloodborn"
"For You I Will Die Young"