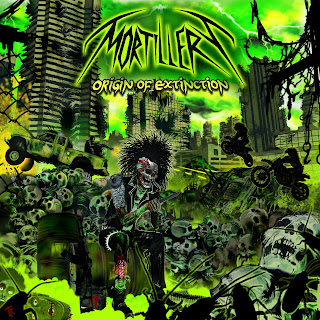 I’m continually surprised at how few females are involved in metal. In the more symphonic and gothic genres, they are certainly more common (mainly as the frontwoman), but I’m still amazed there aren’t more females like Jo Bench (Bolt Thrower) flying the flag of metal. One thing I hate, however, is when having females in a band takes the attention away from the music. There are countless examples of this, even in bands I enjoy, but it is truly satisfying to find a band that doesn’t exploit the gender differences in metal for attention. Case in point is Mortillery, who has two females (one of which is the singer), and I honestly had no clue about this until I listened to their second record, “Origin of Extinction” for the first time.

As a singer, Cara McCutchen has the perfect thrash voice. Her attack is harsh (think somewhere past Tom Araya), but understandable. On first listen, it actually took me a couple of tracks to notice it wasn’t a guy singing. Beyond this description, she’s really your typical thrash vocalist, just she does it better than most. What surprised me even more, what the opening to this record; neither the intro nor the opening to the second track were straight-ahead thrashers. Both feature great melodic solos that set up a different atmosphere from what you would expect. With that said, there is no shortage of intense music. “F.O.A.D.” is an aggressive outburst of swearing and hatred, fueled by the punk roots of thrash. Meanwhile, “Creature Possessor” features McCutchen shrieking her lungs out. In terms of the riffing, I was surprised to find that a few of the riffs are similar to Tankard’s newer stuff. They have that same upbeat, muted riffing style that Tankard abuses (most noticeable on “Feed The Fire”). Overall, however, there is actually a lot of variation in the riffs, it’s just that one style stood out more than others. Mortillery also definitely makes good use of guitar solos. They are more than just a chance for these guitarists to show off how skilled they are. Even when the music underneath the solos is going full speed, the solos often remain quite melodic.

“Origin of Extinction” is probably not quite what you’d expect on the surface. Sure, it has the cool album cover and thrash band name, but this is definitely not just a retro thrash record (not that there’s anything wrong with those either). The band has put in more effort to stand out from the crowd and they do just that.

Be sure to check out and like Mortillery on Facebook!
http://www.facebook.com/Mortillery?fref=ts
Highlights
"No Way Out"
"Creature Possessor"
"F.O.A.D."