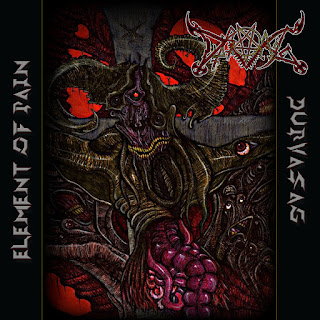 Late last year, I reviewed the promo of the first EP by Durvasag, an up and coming blackened thrash band from Toronto. The verdict was that both songs were completely killer music with plenty of Venom inspiration. Luckily, both of these songs are back and form the six-song, 30-minute aural assault on the ears known as “Element of Pain”. I won’t spend too much time on these songs because I’ve already discussed them, but I will say that they are the strongest songs on this EP and really set the tone for the rest of the release.

The four songs that remain are fairly similar in style. They are primitive, raw, bursts of energy that take plenty of influence from Venom, Sarcofago, and the like. In particular, I found that the frenetic sounds of “Apocalypse” were most similar to early Sepultura and early Sodom. While the drums overpower the other instruments, the harsh riffs and vocals really bring back that old-school atmosphere. In fact, it is Mark Arruda’s vocals that impress me most. Sometimes he relies on simple thrash shouts, but more often he sounds vicious enough to tear out your spine. Arruda’s vocals are the definite highlight, but the other three musicians hold their own. The bass speaks up often enough (especially in the closer, “Demonic Entity”), and the drummer adds plenty of flair to keep things interest (including using plenty of ride cymbal). Speaking of “Demonic Entity”, it’s definitely the one moment here that I feel the band is a bit overambitious. There are great riffs aplenty, but the song is a bit too long for its own good. Still, it is a sign that they might expand past simple Venom worship one day (as enjoyable as that is).

This EP is a definite must-have for fans of black/thrash metal. Between “Sacrifice”, “Nuclear Winds”, and “Apocalypse”, you have some serious thrashing fury from a band that knows their influences well. The other tracks may be a bit weaker, but are still well worth hearing. From a young band, this is a promising release!