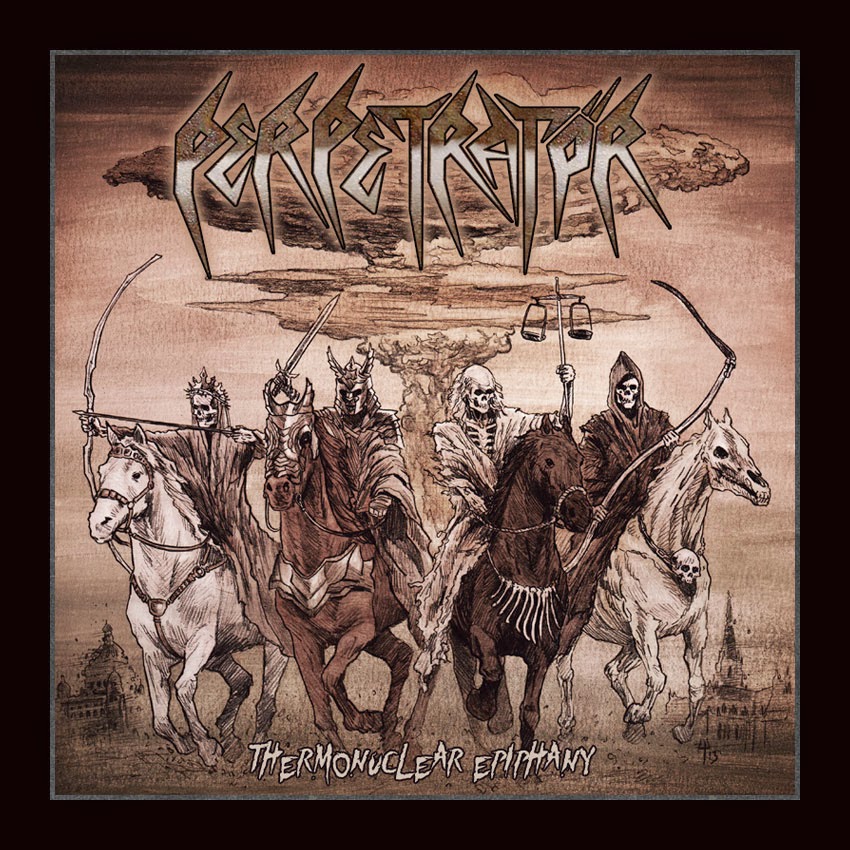 Perpetratör is a thrash band from Portugal, and while I can honestly say that I’ve never heard another band from Portugal, these guys set the bar pretty high. Their debut album, “Thermonuclear Epiphany” is an exercise in German-styled thrash metal that is sure to please fans of the big 3 Teutonic thrash bands. The first way you’ll notice that Perpetratör displays similarities to that ruthless style of thrash is in the vocals. While vocalist Rick Thor doesn’t sound exactly like Mille, Schmier, or Angelripper, he has the same level of character in his voice that those legendary frontmen have. As soon as you hear a Perpetratör track, you’ll know it’s them by the sound of his voice. Another commonality to these bands comes in the opener, “Megaton Therion”, which is one of the highlights of the record. Underneath the chorus is a flurry of notes in the form of a very Destruction-esque lead circa the “Mad Butcher” era. In fact, the guitar playing as a whole is more reminiscent of Mike Sifringer than the other German guitarists for a couple of reasons. For one thing, the solos are well constructed, and not simply abusive of the tremolo bar. The other main reason is that while the riffs do display a propensity towards heavy alternate picking, there are times when they go for a more traditional thrash style riff. A great example of this is the main riff in “Pyres In The Night”, which ranks up there many riffs from “Infernal Overkill”.

“Thermonuclear Epiphany” really excels as a record that creates a headbanging good time. Every song is enjoyable, but only a few create a lasting impression. The aforementioned opener is one of them, but the best song on the album is “Death To All”. With more speed and aggression than anything else, this is Perpetratör at their most fierce. Words are spit out in rapid succession on this song, with seemingly no end in sight. Eventually, however, things go more mid-paced and it absolutely crushes. Another standout track comes in the form of the closer, “Fire Unleashed”. This song is a bit different from all of the others, because it is not solely focused on brutality, but this allows some space for Rick Thor to really impress with his vocals. There's quite a bit more melody in this track, both in the form of the vocals and shredding guitar solos. Overall, however, it is just a nice change of pace from all of the thrashing that preceded it.


This record is definitely impressive. If you like any form of more aggressive thrash, Perpetratör will likely appeal to you. Not only is this album really enjoyable, but it also shows a lot of potential for the future depending on what aspects of the band’s sound they want to expand on. Either way, you should buy “Thermonuclear Epiphany” as soon as possible!