Brain Dead – Menace From The Sickness 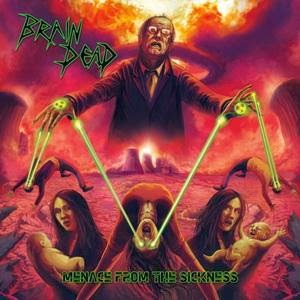 5 years after their debut record, Italy’s Brain Dead is back with a second album of willful thrashing force. Given the band’s location, name, and album art, it should be no surprise that they are signed to the consistently awesome Punishment 18 Records. The band lives up to their thrash roots quite well; in fact, that’s about all they do. Being named after the classic Exodus song, it is clear that Brain Dead are big fans of Gary Holt’s awesome riffs, and that is an influence that is rampant throughout “Menace From The Sickness”. It almost feels like most other thrash influences are ignored in order to attain Exodus’ wicked sound (mostly the sound they had during both Zetro eras).

“Menace From The Sickness” tends to have a wide variety of speedy and mid-paced riffs, but the golden rule on this record is that each riff must be crushingly heavy. As if taking direction straight from classics like “And Then There Were None” and “The Toxic Waltz”, Brain Dead manages to deliver immortally heavy riffs that aren’t just based on playing fast. Aside from the opening of the title track, there is little attention to including large amounts of melody, and even that brief moment is immediately forgotten when the next brutal Exo-riff comes in. As you could predict, these riffs tend to feature plenty of chugging down picking interlaced with huge power chords and some higher notes on occasion. At times, it truly is remarkable how well Brain Dead has captured this sound; the aforementioned title track, alongside “Final Truth” and “Eye of the Cyclone”, does the best job of emulating Holt.


Ironically, it is Exodus’ current weakness that I feel plagues Brain Dead as well. Most of the tracks on the first half of the record reach the 6-minute range, and that’s simply too long for a band like Brain Dead. They don’t focus on creating the most memorable songwriting, so it would be more effective to deliver shorter, more straightforward blasts of aggression-fuelled energy. At times, it feels like the songs just go on without any specific direction. That’s not to say anything on “Menace From The Sickness” is bad, because it certainly isn’t, but there is no need for this album to be 51-minutes long. There are a few standouts, however. Most of the entire second half of the album is quite impressive. “Pay For A Better Life” is the single, and it’s easy to see why. It is sure to be stuck in your head for at least a little while. The two tracks that follow, “Menace From The Sickness” and “Final Truth”, have some of the best riffs on the record. Ultimately, however, this album is really only for the die-hards of newer thrash. It is not original in any sense, and it lives and dies on the quality of its riffs. Devout fans of Exodus should definitely give this a shot though.