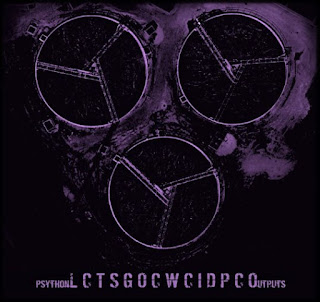 “…Outputs” is the debut album from UK thrash band Psython. As with all great thrash bands, Psython has identified the most important characteristic to excelling at this style of music: overload the listener with as many riffs as humanly possible. If you’re only in it for the riffs, this album is going to be in constant rotation, because not only are there more riffs per minute than on a Vio-lence record, but most of them are actually really good. Whether they come in the form of heavier groove-infested riffs, or breakneck tempo riffs, there is always something to enjoy from the guitars. As though never to shift away the focus from the guitars, Psython also utilizes plenty of solos. Their lead playing is impressive to say the least. The band straddles the line between very talented, frenetic fretwork, to more melodic sounds, always creating something interesting that adds to the song.

Where many may struggle with Psython (and admittedly, I am one of those people) is in the vocal approach. It is very straight forward screaming, but mostly in an upper register, and, to be quite candid, it feels very close to metalcore. There’s nothing inherently wrong with that, but the prototypical thrash style of yelling or shouting is popular for a reason: it works well. For this reason, Psython’s sound is likely to create a niche for them, but for the average thrasher, it might be a more difficult sell. To be fair to the vocalist, his approach doesn’t sound out of place, and he also varies it up slightly in a song like “Blunt”, where he does a bit more singing. Regardless, some may have difficulty with his raspy screaming.


Of course, when the band serves up a track like “GBQ”, which is fast enough that your mind might disintegrate while trying to comprehend what is going on, you have little other choice but to obey the power of the riff. Similarly, a song like “Opposition” stands out for having some of the best and thrashiest riffing on an album that is overflowing with enjoyable riffs. The rhythm supporting all of this madness is competent, but not particularly deserving of special mention. Ultimately, your enjoyment of Psython’s “…Outputs” is going to come down to your stance on this style of vocals, and whether or not great riffs supercede vocals that might otherwise be a little out of style.