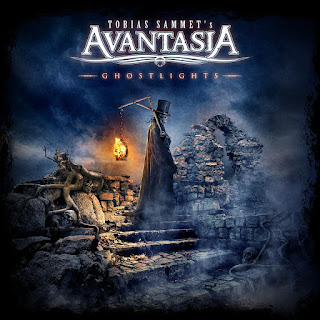 It’s an exciting time to be an Avantasia fan. The once-defunct band is releasing music at an incredible pace (considering mainman Tobias Sammet’s obligations to Edguy), and they’re even beginning to explore new ground in terms of touring. Even before a new Avantasia album is released, there is always a certain amount of hype simply based upon the guest stars that are confirmed. “Ghostlights” marks the return of Jorn Lande, who is arguably the star of Avantasia since their rebirth. This album also includes a few bigger, newer names to the band: Dee Snider, Geoff Tate, and Marco Hietala, alongside some other classic guests: Michael Kiske and Bob Catley. All things considered, this album seemed as though it was going to be bigger and better than anything the band had done even before it was released.

Despite astronomical expectations, Avantasia both met and surpassed them on “Ghostlights”. Often times, it is easy to be blind as a fanboy of the band (which I fully admit I am), but even in spite of this record’s flaws, it truly is great. As the years go by, Tobi only seems to improve when it comes to writing choruses. This is certainly the biggest accomplishment of the record: nearly every song has a monstrous chorus. Whether it is the epic “Let The Storm Descend Upon You” (perhaps the most symphonic song on a record that has toned down the orchestration since the last album), the creepy yet catchy “Draconian Love”, or the classic power metal anthems of “Ghostlights” and “Unchain The Light” (both of which naturally feature Kiske), the choruses on this album are simply otherworldly.

Individual highlights on this album are in numerous supply. Admittedly, the record gets off to a bit of a slow start (more on that later), but things really pick up with the title track. As mentioned earlier, this is one of two songs faster, old-school power metal songs that Tobi includes on every album. Once again, his love of Helloween’s “Eagle Fly Free” shines through, as this song is all about the high-pitched wail of Kiske (who sounds better than ever; his recent tendency to abuse vibrato has been dialed down).  The next song, “Draconian Love” is the strangest song on the album. Put simply, this is the type of tune that “Crestfallen” (from "The Wicked Symphony") tried to be, but failed at. Herbie Langhans gives a mysterious and passionate vocal performance, which is primarily based around his lower register. His captivating words “you shed draconian love” will remain in your head far longer than they should. The word gothic appears fitting, as this song is truly out there. It’s the type of track that really shouldn’t appeal to the average metal fan, yet it is effective because it's different. It doesn’t feel like a rehash of anything the band has done in the past, but instead, an improvement. Although much of the song has a darker vibe to it, the chorus is actually quite upbeat. The interplay between Tobi’s bombastic melodies and Langhans disturbing lines in the chorus brings these two sounds together flawlessly.

The second half of the album is where it really shines. You can pick out any song, and it ranks amongst Avantasia’s best work. Deserving of special mention is “Lucifer”, which is quite possibly the best song Tobi has ever written between both of his bands. The track starts out as a ballad, featuring Jorn and Tobi trading lines, accompanied solely by a piano. Near the end of this section, they harmonize their vocals in such a way that perfectly explains why I believe Jorn is the best singer in Avantasia: his voice is the ideal complement to Tobi’s, and incredibly emotive. After this, the song erupts into a fast-paced rocker, with guest shredder Bruce Kulick leading the way. In nearly a decade of listening to metal, I’ve never had my jaw literally drop from how awesome something was, but this solo made that happen. It isn’t that it’s the most technically dazzling piece of work (though it’s by no means simplistic), but it fits the song very well. The remainder of the track has a driving beat to it (particularly in the second and final chorus, where the bass drum pounds out 8th notes), and shows Avantasia rocking at full force. This, however, is the problem: the song just stops after the second chorus. “Lucifer” should have had at least another verse and chorus added, and quite honestly, it should have been the 12-minute epic. This song is so inspired, that it is the highlight of the record.

“Master of the Pendulum” is another track where Tobi’s voice meshes well with the guest singer: Marco from Tarot/Nightwish. Put simply, this track could easily be a Nightwish song. Everything from the riffs, to the delivery of the vocal lines screams Nightwish (despite the fact that there isn’t a female voice anywhere in sight of this song). Perhaps what is most amazing is the fact that the song emulates the subject matter; it is a rare feat to actually pull this off. Edguy’s “The Pharaoh” is an instance where Tobi matched riffs with lyrical content; similarly, the hypnotic rhythms of “Master of the Pendulum” could not be more appropriate. The quiet, clean-guitar driven opening truly sounds like a pendulum swinging back and forth, while the chorus has a certain constancy to the timing of the vocal delivery that again feels like the passing of time.

Perhaps the final song worthy of individual mention is “Babylon Vampires”. At first blush, this appears to be the spiritual successor to “Invoke the Machine” from the band’s previous album, but it isn’t long before the guitars really let loose and show this song for what it truly is: a six-string shredder. This song has the most deliberately over the top guitar work of Avantasia’s career, as there are multiple sections where the rest of the band stops to allow the guitars to rip through an absurd number of notes. Its 7-minute runtime is barely noticeable, as the upbeat, bouncy approach of the track makes it go by quickly. It marks instance 8 out of 11 of having a chorus too memorable for its own good (“Seduction of Decay” being the lone dissenter), and represents another highlight.

“Ghostlights” is not without its issues (I say this in spite of the rating). The biggest disappointment of the record is the performance of the two big names: Dee Snider and Geoff Tate. The former does a good job on an atmospheric piece that appears to be an attempt at rewriting “Death Is Just A Feeling”. To be fair, "The Haunting" has grown on me with each listen, largely due to its monster chorus. Outside of the chorus, however, it isn’t an overly interesting effort. The bigger problem is “Seduction of Decay”, which features Tate. I haven’t heard a Queensryche record since “Empire”, and I know he can’t sing like that anymore, but he’s just bad on this song. This is compounded by the fact that this particular song is also the least interesting track musically on the record; even Tobi doesn’t give a great performance. At over 7 minutes, this song just can't sustain its length. Ironically, “Seduction of Decay” is probably the heaviest tune on the album, it just isn’t the best written.

As noted earlier, the opening two tracks also leave mixed impressions. “Mystery of a Blood Red Rose” is a song that was underwhelming at first, but also appears to be a grower. Tobi twists his voice in the chorus in a way that is not all that appealing, but aside from that, it’s a short, fun track. In the grand scheme of the album, it feels a little out of place, but it isn’t bad per se. The 12-minute “Let The Storm Descend Upon You” is an entity all on its own. Opening with the theatrical piano-laden grandeur of Savatage, you know there’s something special about this song from the moment it begins. Both the pre-chorus and the chorus re-define what catchy means, and it is once again Jorn Lande who takes this song to the next level. With that said, the song can’t quite sustain 12 minutes. There’s a lot of interesting material, but sometimes it wanders aimlessly. You could easily trim off 4 minutes or so without losing much (which would be better added to “Lucifer”).

The only other frustration I had with this record (and it is admittedly a minor one), is that Sharon den Adel is, predictably, relegated to a ballad. She gives a great performance, as has every female to sing on an Avantasia release, but it seems odd that the female singers are consistently segregated and given ballads to sing. Her voice may have been able to add some vigor to a song like “Seduction of Decay”. Nevertheless, the song she’s featured on, “Isle of Evermore”, is one of the stronger Avantasia ballads in recent years, far surpassing the likes of “Sleepwalking”, “Symphony of Life”, and “What Kind of Love”.


The criticisms above are overly harsh. “Ghostlights” is a fantastic record, and one that will define Tobi’s career. Not only has his songwriting become more diverse, but he’s finally perfected each different style. The fact that this album can seamlessly move between tracks like “Ghostlights”, “Draconian Love”, and “Master of the Pendulum” is a testament to both Tobi’s songwriting abilities, and his unique talent for writing songs that maximize the talents of the singers he works with. The fact that his voice can handle each of these songs only further proves his skill. This album isn’t perfect, but it is worthy of a 100% rating.