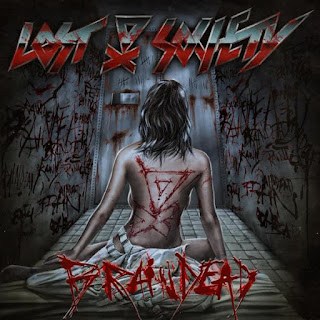 The first two records from Finnish thrashers Lost Society were some of the more fun and reinvigorating records the subgenre has scene in recent years. Though a bit silly at times, they definitely brought back fond memories of many thrash legends from the 1980s. Like many of those bands, however, Lost Society also decided it was time for a change. “Braindead” shows the band making 2 distinct modifications to their music.

The first difference is noticeable right from the get go. Vocalist Samy Elbanna has largely abandoned his awesome singing voice to take a more visceral approach; bordering on metalcore at times, while more death metal at others, this is not a positive change. The opening two tracks emphasize this style more than the remainder. “Riot” is a pump-up, tough guy song that sounds like Pantera influenced Lost Society just a little bit too much. The groove is simply too strong on this particular song. On the other hand, “I Am The Antidote” is a monolithically heavy tune that evolves into one of the most impressive displays of guitar work seen in thrash recently. In fact, this is a common theme on this record: the guitar solo sections are longer, faster, and more technical than they’ve ever been. Unlike many shredders, both of Lost Society’s guitarists don’t rely on the same scales or melodies, making each solo a unique experience.

The other area where “Braindead” differs from its predecessors is in the nature of the thrash songs. Many of the remaining tracks on this release are still thrash to their core, but they’re longer, more mature, and a little bit more interesting to listen to than the band’s previous work. “Mad Torture”, for example, shows the band releasing their aggression through gang vocal shouts of the chorus. This song is just one great thrash riff after another, with more emphasis on melody than any of the band’s previous work. It’s at this point on the record when Elbanna goes back to his more old-school vocal style, though he still mixes the two throughout the record.

“Braindead” is at its best when it is blasting full speed. The best evidence of this comes from “Rage Me Up”, which is by far the fastest song on the album. In fact, this is the fastest thing the band has done in their career, and if you even attempt to keep up by headbanging, your neck will fall off. To be fair though, the band can still keep things interesting at a more mid-pace. One example is “Hollow Eyes”, a song featuring an incredible galloping riff that doesn’t exactly break any speed barriers, but it does get some heads moving.

As the album goes on, it gets even more interesting. The cover of Glamtera’s “P.S.T. 88” is a unique (though not unsurprising) choice, and adds more diversity to an already varied record. After that is “Terror Hungry (Californian Easy Listening Version)”. Fear not, thrashers, as this song absolutely rules. It’s a re-recording of the title track from the previous album, and while the band claims it is easy listening, that is only relative to the rest of the album. In fact, it’s more of a tame traditional heavy metal version of the song, and it shows Elbanna doing full-on clean vocals throughout, revealing the fact that he is actually an excellent singer. This song is so well executed and so much fun that it leaves a very positive impact of the record as a whole.


“Braindead” is a somewhat difficult record to evaluate. The thrash songs themselves are better than ever, and the more groove/core-based style that has infected other moments of the album only ruins “Riot”, as “I Am The Antidote” still rules despite this problem. This album is likely a warning of the future of Lost Society, but as long as they keep making songs that truly thrash, their releases will be worth buying. The enhanced guitar work makes this record even further compelling, as does the humourous re-recording.