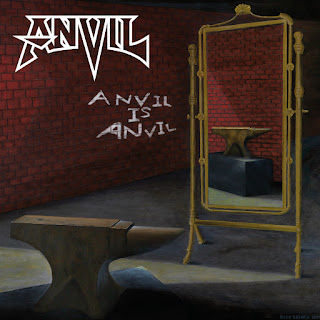 “Anvil Is Anvil”, is the title of the 16th album from Anvil (as you may have already guessed). Unsurprisingly, like a lot of things this band does, the title is so bad that it’s amazing. Throughout their 30+ years of existence, the band has always delivered songs and themes just a little too silly for their own good (“Stop Me”, “Waiting”, “I’m Trying To Sleep”, the list goes on an on). And yet, throughout it all, they’ve rarely released a weak album. “Anvil Is Anvil” continues this trend, as this is another record filled with everything that makes the band so great. This means most tracks are relatively simplistic songs driven by Lips’ iconic vocals shouting the chorus. Of course, his classic soloing style that is instantly recognizable is everywhere on this album because despite being nearly 60 years old now, Lips’ fingers are not slowing down. Similarly, his longtime partner in crime, Robb Reiner, also puts forth an excellent drum performance, which is always essential for any Anvil album.

Despite the band’s general predictability, this record shows some experimentation from the veterans. In particular, quite a few tracks make use of extensive backing vocals, unlike anything the band has done before. On a track like “Daggers and Rum”, this is particularly effective because it captures the feel of a group of pirates singing along. On the other hand, on “Zombie Apocalypse”, it makes the song feel tired because Lips’ vocals on his own are far superior. The track itself is a decent thumping tune, and also features some of the best lead guitar playing on the album, but the chorus is definitely the weak point of the song.

Of course, much of the record is more standard Anvil. They have songs like “Up, Down, Sideways” and “Die For A Lie”, where they move at their more upbeat tempo that is akin to their early speed metal days. These songs are where Anvil shines because they keep the record churning forward. Another highlight is the pounding “Gun Control”. Regardless of your political stance, this song is a monster because the riffs are huge, and the spacier vibe of the song gives Reiner plenty of room to shine with all sorts of unique fills. "Runaway Train" adds to the barrage of speed, this time showing Lips coming up with some unique melodies in between his vocal lines that complement the subject matter of the song.


The second half of the album isn’t quite as strong. The aforementioned “Zombie Apocalypse” is by no means one of the better Anvil songs, nor is “Forgive Don’t Forget”. This latter song also uses tons of backing vocals, but the track feels very incomplete, similar to Judas Priest’s “Defenders of the Faith”. Fortunately, if you have the version with the bonus track “Never Going To Stop”, it prevents the record from petering out, as this song is more in line with Anvil’s typical sound. There are tunes later in the album like “It’s Your Move” and “Ambushed”, which retain the speed and energy, but this is an instance of a record that might have been better off with 8 or 9 tracks instead of 12. Regardless, “Anvil Is Anvil” is Anvil, and that means this is an essential purchase if you’re a fan of the band!

Highlights
"Up, Down, Sideways"
"Gun Control"
"Die For A Lie"

at 9:50 AM
Email ThisBlogThis!Share to TwitterShare to FacebookShare to Pinterest
Labels: 2016, Anvil, Anvil Is Anvil, Canada, Heavy Metal, Speed Metal