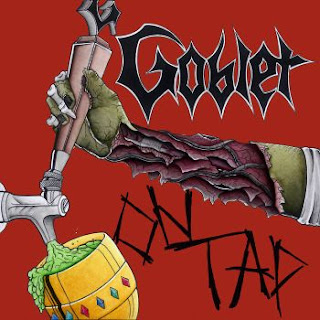 “On Tap” is the second EP from American thrashers Goblet. Featuring 5 tracks, it is a mixed bag of a variety of sounds that cause both headbanging and head scratching. The former sound is achieved when Goblet is playing faster, more aggressive riffs. The band’s singer draws most of his influence from the crossover scene, as he spends most of his effort yelling (though the ending of “Full Metal Jacket” does show some much more brutal screaming, as does “Party Monster”). Like many of the subgenres vocalists, Goblet’s singer isn’t the most technically proficient, but it works. He doesn’t unleash any wickedly fast passages, but again, the more simplistic approach is effective.

The middle three tracks on this EP are the best because they follow a tried and true formula. When the band experiments, however, things go awry. A great example is the start of the EP. Similar to many other intros, it begins layering instruments as it attempts to build to something heavier. Unfortunately, the tame production makes the single guitar sound weak and thin. The other strange song is “Acid Rain”, which brings more of a doom/stoner vibe. Though these aren’t my subgenres of preference, their brief appearance here isn’t my chief complaint; instead, it is the contrast with the crossover sounds of the other songs that makes it out of place. It also doesn’t help that the lyrics are not the best.

The problems with “On Tap” do not make up a significant portion of its playing time, which is why it is a worthy EP that displays quite a bit of promise. If the band can tighten up the production, and stick to playing more intense riffs, Goblet will definitely be a group to watch. 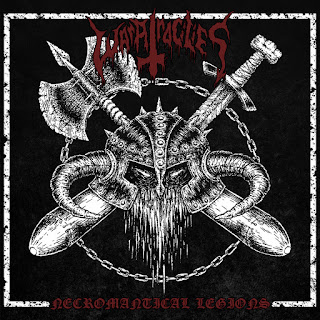 War Atrocities is a Croatian black/thrash solo project masterminded by vocalist and guitarist Wastelander. After a demo in 2014, “Necromantical Legions” was the next step. Though this release boasts 7 tracks, there are 6 full songs. “Screams From The Pits” is an instrumental intro that successfully conjures a dark, brooding atmosphere, with minimal metal contributions. Things really get going on “Destruktor of Eternal”, a song that demonstrates both the strengths and flaws of War Atrocities’ music. This track shows an incredibly tight blackened thrash sound, with more emphasis on having a decent production than a noisy one. Indeed, every instrument on this release is easily to hear (the thick, distorted, Venom-like bass included). Unfortunately, this relatively clean sound also displays the biggest problem with “Necromantical Legions”. On more than one track, there is either some kind of extreme tuning issue, or an insanely incompatible and ill-advised harmony going on. Based on how blatant this is, one would think it is intentional, but even in the context of a black metal-influenced band, it is not easy to appreciate.

The good news is that this issue is not pervasive, which again leads me to believe it is a purposefully strange harmony. Most of the album unleashes primitive, Venom or Bathory-inspired riffs, atop awesome rocking drum beats. These riffs take the simplicity of the NWOBHM sound, and put a more sinister twist on them. The result is quite effective, as this style of riffing is consistent with the overall primordial atmosphere of the release. Even the vocal approach is not overly complex. Bathory again appears to be the main point of reference, as Wastelander utilizes a mid-range growl almost exclusively.


“Necromantical Legions” doesn’t really throw any surprises at you, but it doesn’t need to. War Atrocities clearly subscribes to the philosophy of less is more, and this is clear in their pure worship of bands like Venom and Bathory. If they can get the tuning (or songwriting) issue sorted out, it would go a long way towards making this release more impressive, but this sound only does show up on a few riffs throughout the EP, so it can be largely ignored. While not original, “Necromantical Legions” is nonetheless powerful.

Just a year after putting out a killer black/thrash demo, France’s Mortal Scepter has signed with Unspeakable Axe Records to release their first EP, entitled “As Time Sharpens The Sentence”. This EP is an excellent embodiment of what makes this dark style of thrash great, as it delivers both riffs and atmosphere with incredible consistency. Take the title song for example, where Mortal Scepter makes use of the trademark black/thrash ride cymbal abuse as they unleash crawling riffs that make significant use of the fretboard. Shortly after this, the first verse begins, and the riff underneath is so potent that you almost forget that the vocalist is singing. This is quite possibly the most enticing section of the entire record simply because the riff is so active, and perfectly compliments the insanity of the band’s vocal approach.

As you might imagine, the band’s singer, offers a more brutal take with his snarls. Paying great homage to early black metal, his singing is raspy and cavernous, and with the right amount of effort from the listener, can occasionally be understood. He also incorporates his take on those Schmier-esque high-pitched screams on more than a few occasions. Even though his voice is very serviceable, it truly is the music that makes “As Time Sharpens The Sentence” so great. A song like “Execution Symphony” shows the band firing on all cylinders; the double bass that opens the track is immensely powerful, and is the driving force of this track, which spends most of its time firing off uptempo riffs. Much to the delight of 4 and 5-stringers everywhere, this song also has a superb bass presence; Mortal Scepter’s bass player is unleashing all sorts of interesting lines that stand out even amongst the madness of the guitars. This track as a whole exemplifies the EP: fantastic performances all around with maniacal riffs and an insanely tight rhythm section. Though the band makes use of many black/thrash tropes, they don’t rely on any one in particular, and instead look to great songwriting to keep you coming back to this release.

And then there’s the Destruction cover. It is my opinion that “Sentence of Death” is the best black/thrash release in history, and “Total Desaster” is also deserving of the title of best black/thrash song ever. The reality is, nobody is going to do this song justice. That’s not a shot at Mortal Scepter; the simple fact is that it is impossible to recapture the energy that Destruction had on that original recording. But Mortal Scepter does a pretty decent job. This style of music has certainly evolved since 1984, and the band manages to make “Total Desaster” sound more like one of their songs than you might otherwise expect.


“As Time Sharpens The Sentence” is an impressive offering of black/thrash that shows Mortal Scepter can stand up against any band in the subgenre. They’ve nailed the production on this EP, and the songwriting is also strong (though I wouldn’t mind seeing the band taking a stab at shorter, more concise songs). Overall, this release is yet another must-own from Unspeakable Axe Records! 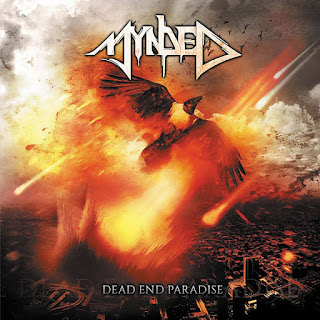 Nearly 30 years removed from the heyday of German thrash, the legendary country continues to pump out young denim jacket-clad thrashers with incredible ease. The next such example is Mynded, a 4-piece group formed a few years ago. “Dead End Paradise” is their first full-length record, and comes on the heels of an EP released in early 2013. This album has everything a thrash fan could want: riffs that will cause permanent memory loss inside your skull, technical playing that showcases incredible talent without being overbearing, and even a few great songs. One example of where all of these elements combine is the opening track, “Kill or Be Killed” (which is far superior to the similarly named band). The song pounds along furiously, while incorporating heavier thrash breakdowns into the chorus with no difficulties.

The ability to seamlessly change the feel of a song by adjusting the drumbeats is something Mynded does quite often. In fact, the band could actually benefit from simplifying the drumming a little bit and utilizing more of the standard kick-snare-kick-snare beat that is so prevalent in thrash. This beat is obviously common on the record (after all, it is thrash), but its appearance is always welcomed. To be fair, most of your attention on this record will likely be focused on the guitars. When Mynded’s guitarists aren’t delivering serious riffage, they’re likely working in tandem to provide killer harmonies. The first time this becomes particularly noticeable is in “Humanity Faded Away”, which has a very Maiden-inspired section in the middle. As if that weren’t good enough, the band goes and does something similar on “Overthrow”, but with significantly more speed.

Being from Germany, one might expect Mynded’s vocal approach to be more on the brutal side; however, the band’s singer is a far cry from the screams of Mille or the shrieks of Schmier. Instead, he goes for a more subdued approach. On the one hand, he is by no means a virtuosic singer, and is not meant to compete with Joey Belladonna. On the other, his voice lacks the true visceral sound of the aforementioned German singers. The outcome is something that tries to be aggressive, but with an inescapable sense of melody. Though he doesn’t sound like Matt Drake (Evile) or James Hetfield, these singers would be appropriate comparisons. While his voice is good, it feels like he's on the edge of his potential without hitting it yet. The best is yet to come for Mynded's singer.


Overall, “Dead End Paradise” is an admirable effort. The band knows what they do well, and that is playing relatively fast-paced thrash metal with a few hints of melody. Mynded doesn’t experiment a lot, nor do they often leave their comfort zone, but the result is a record that is both well composed and very enjoyable. While it would be nice to see them up the intensity of the music even further, one can’t fault them for adding a bit of variety to an often one-dimensional subgenre of metal.

Highlights
"Kill Or Be Killed"
"Humanity Faded Away"