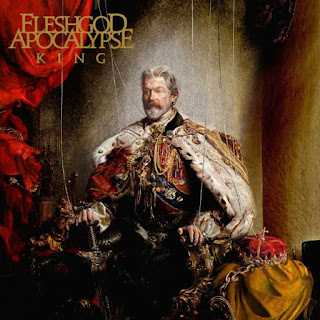 Fleshgod Apocalypse has had one of the more interesting careers in metal, despite only releasing their 4th full-length record recently. A drastic change in sound has led to them both gaining and losing a ton of fans. In particular, “Agony” seemed really all over the place, with keyboard lines that didn’t make a lot of sense. This is actually why it was my favourite Fleshgod Apocalypse release: because it was so absurd. “King” shows the band finally realizing what they had set out to do just a couple of albums ago. Not only is the music much more coherent and interesting than it has ever been, but the band is writing some truly magnificent songs.

“King” features all of the landmarks of the band’s sound: there are a ton of blast beats, growling vocals, warbly clean singing, and female opera vocals (which make a prominent appearance on this particular record). This is all done over top of insanely heavy and occasionally technical death metal. Where “King” differs from the band’s previous work is that they have mastered the use of melody. This is evident in 3 main areas. Firstly, the bassist’s clean singing, while still a little bit strange, is much more refined this time around. He’s able to hit all of the notes he needs to, and generally sounds quite good. Next, the band’s guitar playing has also been stepped up. While many of their solos in the past were technically dazzling, they only served the chaotic nature of the music. On “King”, the solos are much more melodic in nature. Often times, the rhythm parts of the songs slow down considerably, allowing the guitarists room to shine. Finally, Fleshgod Apocalypse has been able to create a number of moments on this record that inspire feelings of longing and despair through the use of slower, pounding double bass, with very subtle keyboard lines over top. This is most noticeable on songs like the doomy “Cold As Perfection”, and “And The Vulture Beholds”.

The latter of these two aforementioned songs shows the band at their best. It features absolutely everything they achieve on this record, from the colossally heavy riffs and blasting, to the creation of incredible atmosphere, to the perfection of melody through guitar solos and clean singing. It isn’t the only highlight, however. “In Aeternum” is a triumphant affair, overflowing with grandiose sections. “The Fool” takes a more unique approach, aided by its fittingly playful intro. “Syphilis” is a fitting end to a truly epic album.

Despite the major improvements “King” makes, it is not without flaws. The big problem this album has is “Paramour (Die Leidenschaft Bringt Leiden)”. This is a full-on opera song, featuring only a female singer and a piano. I have no issue with this sort of thing, but the song is right in the middle of the album and breaks the flow it has. Additionally, the song is almost 4 minutes, and actually has a false ending, making it longer than necessary. The other distraction on this record is the title track. Fleshgod Apocalypse always uses piano-driven title tracks as their outros, but they serve less purpose as the band has transitioned towards a more symphonic sound. The album is already a bit overlong, and if you cut it down to 10 songs (excluding the two mentioned above), you’re left with a much more manageable length record that ends on a high note with “Syphilis”.


Nevertheless, this record is the band’s best work to date. It doesn’t ignore high-speed brutality all together, but it does create enough unique moments to keep it very memorable. This album is likely to appeal to older fans of the band more than “Agony” did, simply because the symphonic work is much more natural and appropriate for the rest of the music. Relative to “Labyrinth”, the songwriting is much stronger and more memorable this time around. Overall, this makes “King” the ultimate Fleshgod Apocalypse record to date, and it will be interesting to see where they go from here.

Highlights
"The Fool"
"Cold As Perfection"
"And The Vulture Beholds"
"Syphilis"