Hellcannon – Return To The Wasteland 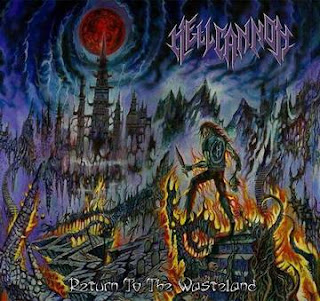 Hellcannon’s 2010 debut album was a serious thrashing force that put the band on the map. And though there wasn’t much fanfare around 2014’s “Terminal”, the band soldiered on with another release, putting out “Return To The Wasteland” earlier this year. The good news for fans of Hellcannon is that this album is very faithful to the band’s crushing style of black/thrash metal. Hellcannon definitely takes a lot of influence from the more extreme metal subgenres, as this record is filled with tremolo-picking and blastbeats (“Warhaze”, the opener, even kicks off with both of those elements after a short intro). Despite the band’s clear affinity towards these other styles, they remain distinctly a thrash band. This is because the band often injects more typical thrash riffs into each of their songs, complimented with the classic kick-snare thrash beat.

Much like on their debut record, Hellcannon has put together a potent collection of songs. Bands that lean in a more extreme direction often fail to write memorable hooks, but Hellcannon has no shortage of interesting ideas. “Road Warriors” in particular stands out as one track that is unique because of its less aggressive approach. Of course, the vocals are still a blackened affair, but musically, the song is much tamer than the band’s normal high-speed forceful thrashing, instead opting for a speed metal sound. Aside from this track, songs like “Day of Demise” and especially “Disarmed and Deceased” (which almost feels like a punk song) stand out as being some of the band’s better works. While most of the album is pretty fast, there are moments like the intro to "Blood Moon Rising" where the band unearths huge riffs that allow rolling double bass to take centre stage.


“Return To The Wasteland” doesn’t really have any weak points. It feels slightly less impactful than “Infected With Violence”, but that might just be the result of having listened to that album for the last 7 years, and this new one a much shorter amount of time. Ultimately, “Return To The Wasteland” very accurately describes what Hellcannon is about, and that is delivering a brutal, black/thrash experience!

Final Rating
4.4/5 or 88%.
at 8:44 AM No comments:
Email ThisBlogThis!Share to TwitterShare to FacebookShare to Pinterest
Labels: 2017, Black Metal, Death Metal, Hellcannon, Return to the Wasteland, Thrash Metal

Tankard – One Foot In The Grave 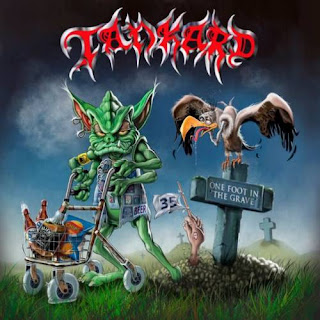 With Motorhead unfortunately no longer with us, Tankard have now become the undisputed Kings of consistency. “One Foot In The Grave” marks their longest break between albums since 1998, at just 3 years. Nevertheless, this record picks up exactly where “R.I.B.” left off, and offers a sufficiently thrashy experience. The band’s music is still predicated on wonky palm-muted riffs underneath Gerre’s hilariously animated vocals. While Tankard may be fairly predictable or safe, they somehow never run out of interesting riffs. This style of riffing lends itself to being quite memorable, so even though there are no real surprises on this album, it doesn’t feel monotonous or overdone.

As with many Tankard records, the real highlight is Gerre’s ramblings. The band’s focus on “One Foot In The Grave” has shifted away from beer (blasphemy!), instead opting for social issues. This isn’t the first time Tankard has explored this direction, and truthfully, they do it pretty well. Sometimes the lyrics don’t translate properly to English, which is part of the fun with this band. Other times the lyrics are just so absurd that you can’t help but laugh ("Arena of the True Lies" being the prime example). Tankard may not sing about beer this time around, but they’re still about having a good time.

Musically, Tankard is still on point. The majority of songs on this record are fast, and even the slower stuff still feels upbeat. Gerre’s voice hasn’t diminished at all, and the remaining musicians are still completely on point. I’m always a little surprised that with bassist Frank Thorwarth being an original member, his bass is never that loud in the mix, but the guitars have such a nice crunch that it doesn’t diminish from the sound too much. The production as a whole is relatively clean, but the guitars have enough bite to them that it isn’t a problem.

Highlights
"Pay to Pray"
"One Foot In The Grave"
"Syrian Nightmare"

Final Rating
4.1/5 or 82%.
at 9:38 AM No comments:
Email ThisBlogThis!Share to TwitterShare to FacebookShare to Pinterest
Labels: 2017, Beer, Germany, One Foot In The Grave, Tankard, Thrash Metal
Newer Posts Older Posts Home
Subscribe to: Posts (Atom)