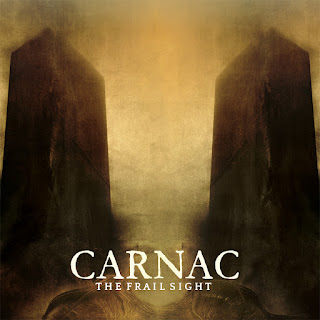 “The Frail Sight” is the debut EP from Turkish band Carnac. Offering up 4 tracks of hard-hitting death metal, this release is a good start for a new band. Things kick off with “Hericide”, which shows the band’s propensity towards writing both thrashy riffs and more technical ones. Indeed, this is not comparable to old-school death metal bands, but rather something a bit more modern in approach. One spot where Carnac beats out their contemporaries, however, is in the low end. The wild bass playing is most evident at the beginning of “Menhirs of Enmity”, where it is the main focus of the music.

A major area of weakness for Carnac is the drumming. There is nothing wrong technically with the drummer’s performance; however, the sound is really poor. Before researching to see that the band had a drummer, I assumed the drums were programmed. The fact that the snare drum sounds the worst is a distraction because it means any time Carnac turns up the intensity, the drums get in the way of brutality. Surprisingly, however, the band does spend a lot of time using more laid back drumming (this is again evident in the opening song).


Aside from the above annoyance, there isn’t too much to say about “The Frail Sight”. Like many modern death metal releases, it is competent in its approach and delivery, but it doesn’t offer anything particularly unique, aside from superior bass playing. Additionally, the songwriting is not extraordinarily memorable, so there is not much to come back to. It is not hard to see how fixing the drum sound alone would make Carnac much more appealing, but for now, this is a band whose best work lies ahead of them.

at 11:35 AM
Email ThisBlogThis!Share to TwitterShare to FacebookShare to Pinterest
Labels: 2015, Carnac, Death Metal, The Frail Sight, Turkey