Cryptic Shift – Beyond The Celestial Realms 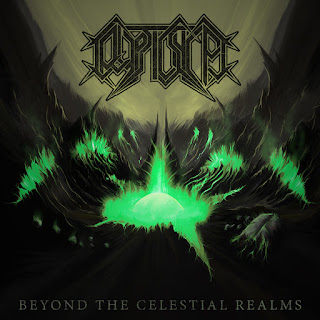 UK-based technical thrash band Cryptic Shift has returned in 2016 with another release. This time it is the 5-track EP “Beyond The Celestial Realms”, which features their tightest, most impressive songwriting and playing to date. For the uninitiated, this band rides the wave of technical thrash metal popularized by bands like Voivod and Vektor, but still manages to have their own unique take on the style. Cryptic Shift is much more within the realm of standard thrash than those bands are, but these guys do tend to have some spacier riffs that make use of uncommon intervals and melodies.

Still, the thing that Cryptic Shift does best is thrash hard and thrash fast. The first full-length track on this EP, “Voyage Through Dimensions”, wastes little time as it reaches breakneck speed by unleashing riff after riff of truly punishing thrash. This song, along with “Spore”, previously appeared on a release of theirs, and it’s no wonder that they brought these songs back because they are quite potent. The former has a riff about two minutes in that was made for ride cymbal abuse, This section will get necks snapping in half. Shortly after, however, the band introduces clean guitars, which allows the bass to shine through. Granted, “Beyond The Celestial Realms” isn’t exactly an EP where the bass has to fight for breathing room; it is quite prominent at all times, providing wandering melodies that interact with the strange movements of the guitars.


The remaining two tracks also fit in quite well. Unsurprisingly, they are monolithic entities of tech-infused thrash riffs, alongside the brutal, death metal-influenced growls that the band’s singer employs. Guitar solos are frequent and dazzling, but every musician is in top-form. Even the production is on point. The only real complaint I have is that the band has a ton of releases to this point (with songs overlapping amongst the releases), but no full-length album. The next step for Cryptic Shift is clear, but it would be a mistake to ignore this EP as you wait for the inevitable full-length.

at 7:23 PM
Email ThisBlogThis!Share to TwitterShare to FacebookShare to Pinterest
Labels: 2016, Beyond The Celestial Realms, Cryptic Shift, Thrash Metal, UK