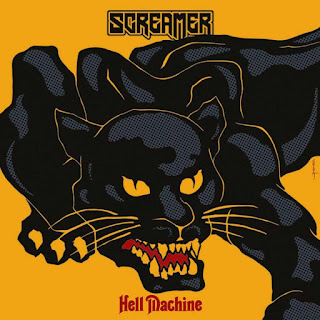 Much has changed for Swedish heavy metal juggernaut Screamer in the 4 years since their last album. Vocalist/bassist Christoffer Svensson left the band a few years ago, and was replaced by two members. His vocals were definitely an integral part of the band’s identity, but not completely irreplaceable. This brings us to 2017’s “Hell Machine”, an album that picks up exactly where “Phoenix” left off. This succinct release features 8 hard-rocking heavy metal anthems. Though the singer may be different the core elements of the band’s sound remain intact. They still worship the typical heavy metal legends that most traditional bands borrow from, and Screamer also continues to use those unique melodies that always made their songs stand out from the crowd. One of the most refreshing things about Screamer is that their two guitarists, while very talented, rarely unleash an all-out shredfest. Instead, they opt for more melodic and memorable licks in their solos, creating emotional and impactful moments.

Screamer has always shined in the songwriting department and “Hell Machine” is no different. “On My Way” is easily one of the best songs the band has ever written, due largely to the fact that its chorus is the ultimate sing-along anthem. The other single, “Monte Carlo Nights”, is another highlight, but even deeper cuts like “Lady of the Night” and “Denim and Leather” have plenty of replay value. Sometimes the lyrics feel a little cliché or overused (“Warrior” and the aforementioned “Denim and Leather” in particular suffer from this), but this is not a style of music that is thriving because of originality. And when it comes down to it, Screamer’s musical traits are unique enough to make them distinct from their peers.

Naturally, this brings us back to the new singer. Like Svensson before him, he definitely has an unmistakable voice. In other words, you’ll know you are listening to Screamer the second you hear him. Though he gives an admirable performance, the shoes he had to fill were just too big. Sometimes he displays unlimited potential, such as in the bridge of “Monte Carlo Nights”, where he screams his lungs out, but even these fiery moments don't dispel the fact that he can’t live up to Svensson. Now, this doesn’t mean he is bad at all. In fact, if this album were to be your first impression of Screamer, you wouldn’t have a single complaint. As a long-time fan, however, it is difficult to get past this. And this is truly no different from any other band; the singer is often the face of the band, and with very few exceptions, fans almost always side with one singer over the other.


In the end, “Hell Machine” is about playing fun heavy metal. The slight hard rock elements that the band had alluded to on their previous records are gone completely, and the result is a pure heavy metal package recalling bands like Saxon, Iron Maiden, and Judas Priest. Twin guitar harmonies are used to maximum effect, and on practically every song (“Lady of the Night” having the most potent example). Screamer has no shortage of riffs, and they manage to make them interesting despite not reinventing the wheel. Their constant ability to write compelling tunes is ultimately what makes “Hell Machine” an essential purchase! 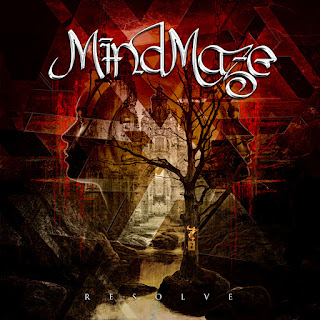 “Resolve” is the third full-length effort from American progressive power metal band Mindmaze. With 13 tracks spanning over 67 minutes, this album is a monolithic entity that covers a wide gamut of sounds and styles. The influences that drive this record are too varied to name, but certainly fans of any number of classic progressive bands (Savatage, Queensryche, Dream Theater, etc.) will be thrilled with this release. The complexity of this album is displayed as soon as it begins, with an epic instrumental, “Reverie”, kicking things off. It moves through a variety of moods and sounds, revealing that this will by a dynamic record. Perhaps more importantly, it also shows that the guitars will be at the forefront of the music, not allowing them to get lost underneath keyboards.

If it wasn’t obvious enough that Mindmaze’s roots lie in writing good riffs, “Fight The Future” opens with the most potent riffing of the entire album. This song is a direct throwback to any number of great USPM bands like Titan Force or Jag Panzer. It also marks the first of numerous instances where lead vocalist Sarah Teets displays her complete mastery of singing. She has an incredibly melodic voice, but avoids the opera-esque approach that a lot of modern bands take. Each of her vocal lines features power and majesty, again recalling singers of white-collar USPM groups.


As the record progresses, it quickly becomes clear that each musician is at the top of their game. Whether it is the somewhat random, but awesome bass fills or the screaming guitar solos, there is a lot to enjoy on this record if you play an instrument. The band uses their skills to explore plenty of different styles, but ultimately, one of the record’s greatest strengths is also its biggest weakness. Simply put, “Resolve” is too much. It is long-winded and intricate. This is more of a fault of the style they play than Mindmaze’s product itself. It’s impossible to see a prog fan disliking this record, but it is definitely tiring for someone who prefers more straightforward music. Despite having heard this record numerous times, only a handful of tracks consistently stick out on each listen. Regardless though, there really isn’t a bad moment on here. It’s just a matter of trimming the fat to take this album to the next level!