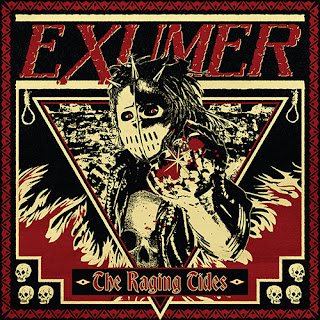 Out of all of the thrash bands from the 80s to reunite and put out new records, very few of them were able to release anything on par or even better than their early work. Even those who continually release killer albums still live in the shadows of their first few records (see: Exodus, Testament, etc.). Exumer is the exception to the rule. Not only has the band somewhat reinvented themselves, they’re better now than they’ve ever been. If you missed 2012’s “Fire & Damnation”, “The Raging Tides” is an equally good place to start. Both albums showcase the band’s ability to offer an endless number of uncompromising riffs. While they tend to be par for the course when it comes to thrash riffs, the production is so thick and crunchy that it makes them sound more original. In fact, the guitar tone on this album is truly otherworldly. The riffs are so potent simply because of how heavy they sound; this is the best guitar tone since Exodus’ comeback efforts.

In general, most of the songs on “The Raging Tides” thrash away at high-speeds, often hovering around the 180-220 beats per minute range (without busting out a metronome, this is the speed it sounds like). For any non-musicians out there, it just means your neck is going to get roughed up listening to this album. There are some exceptions: “Catatonic” is the ultimate mid-paced headbanger. This is again a song where the brilliance of the guitar tone shines; with more room for the riffs to breathe, you really appreciate how heavy basic downpicking is on this record. "Shadow Walker" is similar, as even though it likely hits the speed noted above, it utilizes more chugging than alternate picking, giving off a different feel from many of the other songs on the album.

It wouldn’t be thrash without guitar solos, and Exumer has really stepped it up in this area. Songs aren’t limited to one solo, nor do they necessarily always come at a predictable time. Additionally, there’s a lot of variation to the solos. While always competently played, some solos are more basic and melodic in nature than what you would expect in thrash. Of course, there are still tons of solos that will dazzle the ear, but the ability to inject some alternative types of soloing is much appreciated.

Ignoring all of the above, modern Exumer is greatly aided by the return of original vocalist Mem Von Stein. As with many non-American thrash singers, he has his own unique snarl, and despite being 30 years removed from his debut, he sounds better than ever now. Put simply, he sounds like a man possessed (by fire!). The aggression in his vocals greatly complements the eternally heavy sounds of the rest of the album.


There is one slight problem with “The Raging Tides”: it tends to run together after a while. As noted above, many of the songs are similar in tempo, and because the riffs tend not to be too unique, there aren’t a lot of hooks. Nevertheless, Exumer solved this problem by limiting things to about 35 minutes on this record (if your CD, like mine, also omits the two bonus tracks). Additionally, if you’re familiar with a band of Exumer’s level of obscurity (at least in the 80s), and still seeking out more thrash, you’ve probably experienced a fair share of records that are essentially one long song. You could do a lot worse than Exumer in this area, as a number of songs will actually have you singing along (particularly since some of them utilize gang vocals effectively), but these songs aren’t quite as distinctive as some of the more popular thrash bands. Nevertheless, “The Raging Tides” is an absolutely essential purchase for thrash in 2016, and quite possibly the best work of Exumer’s career. If this album doesn’t get you moshing, it’s time to give up on thrash.