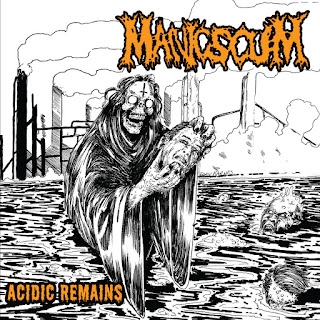 “Acidic Remains” is the newest EP from American death metal band Manic Scum, and was first released in mid-2014. The EP is currently seeing a CD release courtesy of the best extreme metal label around: Unspeakable Axe Records. Despite the release date of this EP, it rarely displays anything that could be considered modern. In fact, if you were completely unaware of any information about the band, you would think this came out between 1990-1992 alongside the classic formative records of bands like Cannibal Corpse and Deicide. Those two bands seem to provide the primary influence on “Acidic Remains”. The opening song for example, begins with a riff that is pure Deicide. It then launches into some blast beats before moving towards a riff that sounds like it was heavily inspired by early Cannibal Corpse. This isn’t to say the band simply copying these two greats, but rather that they are not trying to reinvent the wheel.

Unsurprisingly, this means that “Acidic Remains” is chock full of vicious, speedy riffs, aided by an old-school, Morrisound-esque production. The low-end on this release is especially punchy, which contributes to the early death metal vibe this EP gives off. From a vocal perspective, Manic Scum’s growler doesn’t really have anything distinct about him; his approach is sufficiently low, with no attempts at shrieking or anything of the kind. Consequently, this hearkens back to a time when death metal was a bit purer, and didn’t have a lot of overlap with other subgenres aside from thrash. Variety is not a necessity as long as the riffs rule, and that is exactly what they do on “Acidic Remains”.


The band doesn’t spend the entire EP going all-out in terms of speed. There are also plenty of chuggingly heavy riffs (don’t get the wrong idea; this is the good kind of chugging). Again, the Cannibal Corpse comparisons spring to mind, as both bands have tons of mid-paced, headbanging-inducing riffs that are amplified by the audible bass playing. The key is crushing brutality, and that is precisely what Manic Scum achieves. Of course, this leaves minimal room for originality, but that isn’t a problem here. There’s a reason why everyone gets an excited when a lost death metal gem from the early 1990s is unearthed and reissued: we can’t get enough of this sound. For that reason, Manic Scum’s “Acidic Remains” is a worthy modern addition to this style!