Last month I stumbled across an awesome thrash band from Western Canada named Hazzerd! The band recently unleashed their crushing debut album "Misleading Evil". I had a chance to talk to drummer/vocalist Dylan Westendorp and he dropped plenty of great insight about the band.


Skull Fracturing Metal (SFM): Hi Dylan! Congratulations on putting out a killer debut record with “Misleading Evil”! How has the response been to the record so far?

Dylan Westendorp (DW): Thank you for the kind words! We really worked hard on getting the album to sound top notch and the response has been absolutely fantastic, we really didn’t expect it to get as much buzz as it’s getting, all the reviews we have had so far have all been positive, 4/5s 9/10s I’m really glad we put out a record that has hit home with the thrash crowd especially considering all the melody that is found on this album.

SFM: Every time I listen to the new album, I get some strong Bay Area vibes. Were the bands from this area your main influences?

DW: Yes that is exactly what we were going for, that “80’s”  Bay Area sound. We appreciate and adore 80’s thrash metal as in our minds that is when thrash was at its best, and we really wanted to capture the feeing of 80’s thrash. So yes the Bay Area scene is a big factor for us in Hazzerd.

SFM: The title track is a particularly ambitious effort that is pretty different from the thrashing you guys unleash on the rest of the album. How did this song come together?

DW: Well to be totally honest with you, me and Brendan (rhythm guitarist) wrote the song Misleading Evil about 3 years ago, obviously it’s had some touch ups by the other members of the band since then but how it came together is we wanted to pretty much go all out on one track, make it technical, fast, melodic and most of all we wanted to make it a long song hence why it’s almost 8 minutes long haha. We really wanted to interest the listener and let the music do the talking, going from mellow to aggressive and back and forth through out the song really putting the listener on a roller coaster and making them think about the actual meaning behind the instrumental.

SFM: Thrash obviously comes in many forms, but I’ve found that melody plays a very strong role in Hazzerd’s music compared to some other thrash bands. Can you speak a little bit about how you guys like to incorporate melody into your music?

DW: Absolutely, we find that there are so many thrash bands out there that just want to go fast and aggressive the whole time with absolutely no melody (which is no means a bad thing, hell one of my all time favorite bands is Slayer) but like I said before, 80’s Bay Area scene is our main influence and if you look at bands like Testament Metallica Megadeth, and so on, you hear a lot of melody but also a lot of aggressiveness in the music, we always make sure that we incorporate at least a little melody into our songs, as we personally enjoy melody in our music, and honestly that’s what we make music for, is to enjoy it! 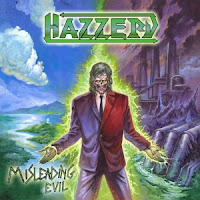 SFM: The cover art on “Misleading Evil” just screams “thrash” with its colourful, almost cartoonish feel. What were the inspirations for this type of artwork?

DW: Well like I’ve said to the boys in the band, a lot of people buy albums because they look cool, and in my opinion the cover art for this album is super rad, it really pops out and like you said “screams thrash” and that’s what we were going for, that thrash looking album art. A fellow by the name of Andrei Bouzikov drew the art off of our concept and really nailed what we were going for. The concept is that some things in life are just always way too good to be true, they mislead you into thinking it’s good when really it’s bad, if that makes sense.

SFM: As “Misleading Evil” was the band’s debut, was there anything you weren’t able to do or accomplish with the record that you are working on for the next album?

DW: Yes absolutely, for me personally I was a little rushed to get the drum tracks down so there’s a fair amount of fills that aren’t what I initially wanted to do so for the next album I will be taking a little more time to get the drums as best as they possibly can be. Vocally I want to add some things into the mix that are a little unorthodox to the typical thrash sound, examples would be: vocally harmonies and gang vocal harmonies, but that’s only if the music calls for it.

SFM: There aren’t too many bands with a drummer that is also the singer. Were you inspired by bands like Exciter and Autopsy, or did things just naturally line up for you to be both the drummer and the singer?

DW: Well I never planned on singing at all, 4 years ago I couldn’t sing worth a shit haha it came down to always being let down with flake auditions and guys who just weren’t very good so I pulled a Dave Mustaine and said “you know what, fuck it, I’ll just sing” and then from there on out I practiced my ass off to get my voice to fit our sound perfectly, I take huge inspiration from Dan in Exciter, he is a monster! Also Gill Moore from Triumph is another big one for me! Vocally though some other inspirations would be David Sanchez from Havok Bobby Blitz from Overkill and Rob Halford from Judas Priest.

SFM: Hazzerd is from Calgary, and while I’m familiar with some thrash bands from the Prairies (Untimely Demise in particular), I’m admittedly not too knowledgeable about your area. How would you describe the Calgary scene in terms of show turnout and quality of local bands?

DW: The Calgary Scene is great man! Everyone supports one another and it’s amazing to see the love all the bands get from each other and promoters alike, everyone is respectful (with the exception of a few bands) the turn out always depends on who’s playing and with who and when, right? Like when we played our CD release back in August we had around 200 people there and it was rad, but we’ve also played shows in front  of 20 people, it goes both ways, but no matter the turn out every band I’ve seen play always rocks out and goes their hardest, other local artists that stand out to us would be Illyrian, Chaos Being, Osyron, Concrete Funeral, Citizen Rage, WMD and many others, the quality is definitely high in the Calgary scene

SFM: Are there any plans in the works to tour Canada or the US in the upcoming months?

DW: Right now we are trying to get a western Canadian tour going and then hopefully go east by summer 2018 and then down to the states for late next year, it’s all part of our master plan and we really hope it pans out so we can go kick some ass around North America!

SFM: Thanks so much for the interview! Any last words for the fans out there?

DW: Not a problem! Thank you for taking the time to interview me! And I just wanted to thank everyone who has helped us get to where we are now, hopefully we can keep this momentum going and take the world by storm! We’re super excited for album # 2 and we guarantee it will be better than the first ! 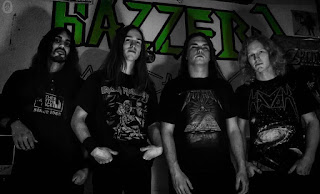