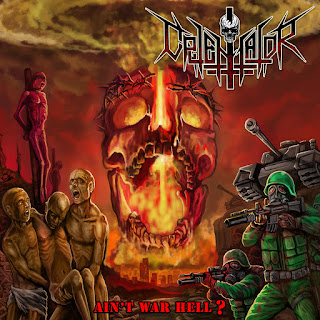 As we look to wrap up 2017, there is already much to look forward to in 2018. My first taste of the new year comes in the form of Cruentator’s “Ain’t War Hell?”. This album is the debut release from an Italian thrash band that is absolutely obsessed with war. Unsurprisingly, the result is a barbaric, no-holds-barred release that does everything in its power to crush you with riffs. With just 8 speedy efforts, it is a succinct offering that says exactly what it needs to before ending. Originality and creativity are not in high supply, but the band’s enthusiasm and passion can’t be denied.

Despite “Ain’t War Hell?” being incredibly raw, the band’s playing is still tight. They clearly take influence from the more extreme side of metal, but moreso from death metal than black metal. This is largely due to the rhythmic precision, and almost militaristic nature of the drumming. Vocally, there is clearly a blackened edge to the singer’s voice, even if he mostly retains a thrash sound. The best comparison would be to imagine if Merciless Death’s singer was even worse and more unhinged (this isn’t necessarily a criticism though; the absurdity of that vocal style is part of the reason why it’s so great).


The one-dimensional nature of Cruentator’s music means that it does little to stand out. There are a few choice cuts, namely “Evil Is Prowling Around” and “The Shining Hate”, but truthfully, any of these songs could stand out if it clicks with you. None of them are particularly different from one another, as each song is just a constant bludgeoning of riffs with shouted vocals overtop. Ultimately, “Ain’t War Hell?” is exactly as it presents itself. It doesn’t reinvent the wheel, but will nonetheless likely appeal to most thrash fans.

Highlights
"Evil Is Prowling Around"
"The Shining Hate"