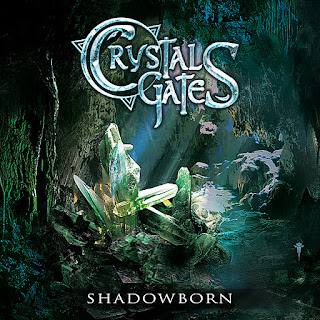 “Shadowborn” is the latest release from Uruguay power/symphonic metal band Crystal Gates. This two-track single is a solid introduction to the band, and definitely shows promise for a future full-length. Of the two efforts, it is clear why “Shadowborn” is the title cut. This is an energetic song that correctly balances between heavy, indulgent keyboards, and actual riffs. Its apex is a thrashy drumbeat that consistently ups the tempo following each chorus. The band does tame things down a bit during the verses, as they allow their singer to take center stage. Crystal Gates' vocalist comes from the Tarja Turunen school of operatic singing, though she isn’t quite as focused on only singing absurdly high. Either way, she does an admirable job, and doesn’t feel out of place despite the occasional intensity of the music.


The other track, “Dreamers (Revisited)”, takes a different approach. It ignores the energy of the opener in favour of a slower, more atmospheric sound. Admittedly, I have not heard the original version of this track, but regardless, it doesn’t really work for a single. If Crystal Gates had unleashed several high-speed burners like “Shadowborn”, then a more toned-down effort would be effective. In the context of a two-song single, the band needs to hit with their two most impactful tracks, and unfortunately, “Dreamers (Revisited)” shouldn’t be one of them. Regardless, “Shadowborn” is an impressive single that should put Crystal Gates on the map. If the band can maintain a similar level of songwriting on a full-length, they will definitely be a band to watch!