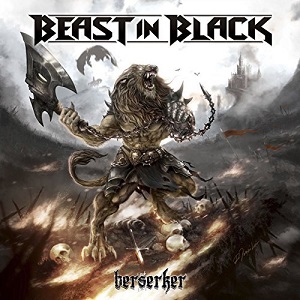 “Berserker” is the first album from Finnish band Beast in Black. The group has a major leg up on most newer acts, as they formed as a result of the departure of lead guitarist Anton Kabanen leaving Battle Beast, meaning that they’ve already gained a sizable following. The good news is that Beast In Black easily stands on their own as a distinct, worthwhile act. Much of “Berserker” feels like pop music disguised as metal, and the result is a disc filled with catchy anthems that will have you singing along after even just a couple listens.

The sound that Beast In Black has created is definitely on the simpler side, but there are two things that separate them from being about only sugary melodies. The first is the lead guitar playing. It should be no surprise that the leads on this album absolutely annihilate most other guitarists’ abilities. It’s almost comical how simple a song can sound until the solo, but then a million notes are fired off at absurd speeds. Often times it even feels out of place, but anyone who loves shredding probably won’t be overly concerned.

The other distinctive factor of this release is singer Yannis Papadopoulos. His voice is a bit raspier than many other singers playing this style of music, but most importantly, he can unleash some wickedly high-pitched screams. The best example is “Blind and Frozen”, which is the ultimate pop anthem on the album. There are several points where turns into a banshee and starts piercing some ears. This track also feels like a straight-up dance song at times. After the guitar solo, it relies heavily on keyboards, which are later complemented by a classic four on the floor drumbeat.

Aside from the obvious single, there are a number of solid efforts throughout the record. The other pre-release tracks, “Beast In Black” and especially “Born Again”, are also winners. They ultimately rely on similar formulas, but put more emphasis on metal than “Blind and Frozen” did. At worst, there are only a couple of weak tracks. “Crazy, Mad, Insane”, isn’t necessarily bad, but feels almost like a techno song at times. It relies a little too heavily on a vocoder to feel comfortable. Truthfully, it’s not a bad effort, but it does stand out as being very different from the rest of the album. Aside from this song, “Ghost In The Rain”, marks a weak end to the record, as it’s a softer, ballad-esque tune. For an album that otherwise relies on power (particularly in the vocals), it closes the record with a whimper.


It might be reductive to claim that “Berserker” is a “Nuclear Blast” album, but that’s actually the perfect way to describe it. Like it or not, the label has bands that appeal to certain types of metal fans. Beast In Black likely won’t be a hit amongst the metal underground, but if you’re the type that doesn’t mind straightforward, catchy music, then “Berserker” is a major winner!

Final Rating
4.0/5 or 80%.
at 9:00 AM
Email ThisBlogThis!Share to TwitterShare to FacebookShare to Pinterest
Labels: 2017, Beast In Black, Berserker, Finland, Heavy Metal, Power Metal