Blood Oath – The Line Between 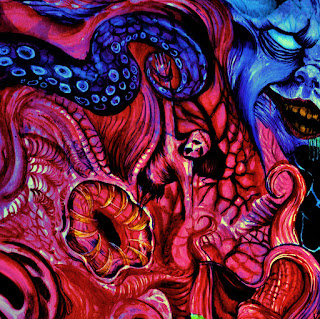 Blood Oath is a relatively newer Chilean death metal band that just recently released their first EP “The Line Between”. The EP was first put out on tape, but is now being re-released on CD by Unspeakable Axe Records, and therefore has the mark of quality before even hearing it! After a short atmospheric intro, the band immediately begins laying waste to your ears with their brand of classic death metal. The intro to this first full track, “Lobotomy”, sounds like the musical descent into hell, as it clearly takes great influence from Slayer and their tremolo-bar abuse. But this is a death metal record, and it isn’t long before the other classic death metal elements come into play.

Blood Oath’s sound is fairly predictable, but that’s a good thing. They occasionally try to change it up on “Lobotomy” by introducing a couple of off-kilter drumbeats, but truthfully, the band is better at playing straight-ahead death metal. Their vocalist in particular is a major strength of the band. Though he has a deep voice, his screams sound more like a ghoul than the guttural beasts that dominate death metal. The best comparison would be to a slightly more untamed version of David Vincent’s vocals on “Altars of Madness”. This is partly because the vocals almost emerge from the background; they aren’t completely at the forefront of the music even though they’re very clear. The result is that they don’t overpower the rest of the music.


This description is true of the rest of the band as well. This EP is perfectly mixed to make each element pop up at just the right time, with no one instrument dominating. The bass in particular is always easy to hear, and makes this dark release sound even murkier. Part of what makes “The Line Between” so great is that it exudes evil. Every single track is an exercise in atmosphere, and the band doesn’t ruin it by overdoing elements like blast beats or even double bass. They use plenty of both, but only when necessary. Much to my surprise (and delight), there are tons of thrashier moments on this record, especially from the drumming. As a result, this EP sounds like something from the late 1980s rather than the years that followed. Overall, “The Line Between” hits all the right spots for my admittedly narrow tastes in death metal. It isn’t as good as the classics, but is unique enough to stand on its own, and as a result, is well worth a purchase!

Final Rating
4.25/5 or 85%.
at 9:58 AM
Email ThisBlogThis!Share to TwitterShare to FacebookShare to Pinterest
Labels: 2017, Blood Oath, Chile, Death Metal, The Line Between, Unspeakable Axe Records