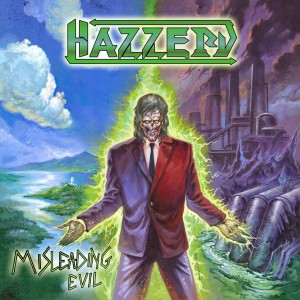 Calgary’s Hazzerd has been around for a few years now, and while their 2014 EP seems to have slipped past me, the same can’t be said for their debut full-length, “Misleading Evil”. The duality of the cover art might suggest that Hazzerd has two sides to them, but they tend to be a straight forward thrash band. Their influences are no secret, with the Bay Area scene likely having the strongest impact on Hazzerd’s sound, particularly from groups such as Testament or Exodus. Like both bands, Hazzerd gets more melodic or experimental when they need to, but never at the expense of bludgeoning you with riffs. The leads in particular really stand out as being well crafted and unique.

To their credit, Hazzerd is very song-focused. The only time they go somewhat off-path is on the title track, which is an 8-minute progressive instrumental track. It might not reach the brilliance of “The Call of Ktulu” or similar efforts, but is nonetheless a nice change of pace. Beyond this track, highlights continue to be numerous. “Absolute Destruction” is interesting because its verses lock into an insanely tight groove where the guitars play speedy 16th notes, yet the drums are more laid back. Another standout cut is “Under The Influence”, which is the only instance of a less serious track that is more of a party anthem. It’s got a slight speed metal edge to it that isn’t found elsewhere on the record.

One element of “Misleading Evil” that makes it stand out is the production. Like many modern thrash albums, it is loud, but where it differs is how the instruments are mixed. The guitars in particular are substantially louder than every other instrument, sometimes even drowning them out. The outcome is 50/50: on the one hand, riffs are the most important part of a thrash album, and this sound accentuates them, but on the other, sometimes it is just too much. Every other instrument has great moments, so a more balanced mix would also be favourable. It does make the guitar solos even more impressive though.


Production aside, “Misleading Evil” gets the job done. Rarely does a band do such a predictable style of thrash successfully. Their avoidance of more extreme vocals in favour of commonplace shouting is also appreciated. Hazzerd truly sounds like a band from the 80s, back when everyone had the same goal but different ways of achieving it. Make no mistake, although this sound has been done before, Hazzerd has their own way of approaching it. As a result, “Misleading Evil” should be an easy favourite for most thrashers!