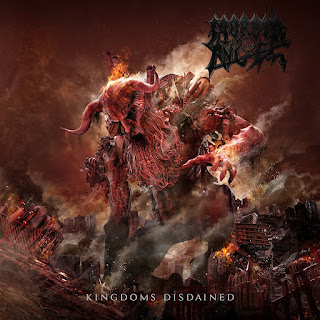 Contrary to popular belief, Morbid Angel’s somewhat disastrous “Illud Divinum Insanus” was not the worst metal album ever made. It was a strange mix of mediocre death metal, with a handful of experimental songs ranging from downright terrible to hilariously absurd (“Profundis – Mea Culpa” is certainly what a death metal rave would sound like). Regardless of what it actually was, it wasn’t Morbid Angel, and the departure of David Vincent and return of Steve Tucker has brought a lot of hope for fans. Interestingly, Tucker’s other band, Warfather, was pretty much a perfect replica of Morbid Angel’s sound, so while it lacked Trey on guitars, it was every bit as authentic as Morbid Angel. Either way, those two are back together again, and the result is “Kingdoms Disdained”.

This album shows Morbid Angel getting back on track. Truthfully, even “Heretic” seemed like a bit of a letdown, so returning to an even earlier sound would be an improvement for the band. While “Kingdoms Disdained” doesn’t have the otherworldly feel of “Gateways to Annihilation”, for example, it absolutely retains Morbid Angel’s classic sound. Every riff on this record has that twisted, mind-bendingly sideways feel to it. Whether it is a high-speed tremolo-picked section, or the more common sludgy chugging sound, it has much more in common with the band’s mid-era sound than anything they’ve done in the last 15 years.

The one common factor missing from “Kingdoms Disdained” is long-time drummer Pete Sandoval. While he’s undoubtedly very talented, his presence is not particularly missed on this record. His replacement is equally mechanical, making even the fastest double bass or blast beats sound simple. The album as a whole is very rhythmic, even compared to a lot of other death metal, and the writing of the drums feels very deliberate. There aren’t many standard death metal beats, as nearly every pattern is crafted to match the band’s depraved atmosphere.


“Kingdoms Disdained” feels unquestionably like a Morbid Angel album, and that is very reassuring. It isn’t, however, as good as much of their older work. The band used to have an uncanny ability to take complex music and write it in ways that were instantly memorable. That doesn’t seem to be the case this time around, as most of the 11 tracks blend together. The overabundance of mid-paced sections with a lack of distinctive vocal melodies, or even psychotic guitar melodies make for a one-dimensional album. As a result, “Kingdoms Disdained” feels and sounds like Morbid Angel, but it is not amongst their best work.