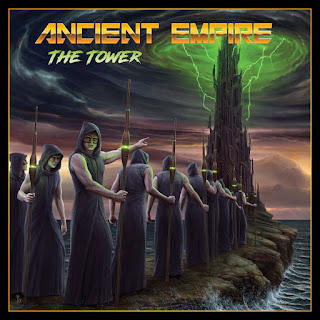 The mighty Ancient Empire has returned to deliver their third effort of high-charged, molten metal! The band has decided that each album cover has to be cooler than the last, resulting in yet another thematically thrilling release. Ignore the awesome aesthetics, and you’re left with an equally exhilarating effort. For those new to the band, they offer some of the most energetic and inspired heavy/speed/USPM around. Truthfully, there’s a pretty fine line between all three of those subgenres at times, so throw Ancient Empire into any one of them you want. The end result is the same: absolutely killer heavy metal!

If there is one legitimate criticism of the band, it would be that not every song is necessarily distinctive. It’s conceptually reminiscent of the “Painkiller” problem: when the music moves at 100% for 45+ minutes, it becomes more difficult to digest (of course, in Priest’s case, their songwriting is just on another level compared to anyone that tried to emulate them). Back to Ancient Empire though: it is hard to fault their musical approach. They overload on double bass and speedy riffs that hit hard. But “The Tower” isn’t just fast; it’s crushing too!

The band is surprisingly heavy, and this trait blends well with Joe Liszt’s vocals. He has enough talent to compete with melodic singers, but also has a slightly rougher edge to his voice that allows him to sound far more at home on this more aggressive type of metal. Even on a slow burning effort, such as “The Curse”, the riffs just stampede the listener with their power. He is particularly commanding in sections where he is singing just a bit slower than the galloping pace that the rest of the instruments move at. The result is a truly epic sound!

Ancient Empire tends to have subtler use of melody than many similar bands. It isn’t absent altogether, but the focus on riffs means that each song isn’t overflowing with harmonized leads. Nevertheless, the band has no shortage of guitar solos, and the occasional lead to finish off a riff or vocal line. Despite the overflow of riffs, there is plenty of room for the bass to shine, with the low end providing a surprising amount of melody at times.


With their third album, Ancient Empire has picked up exactly where they left off. They have begun to craft a really solid career, and while I wouldn’t consider any of their records amongst my favourites, they are consistently enjoyable. They are similar to bands like Tankard where you could put any song or album on at random and be satisfied. For some reason, not many people seem to have caught onto them despite being on one of metal’s best labels (Stormspell Records), but it’s hard to see any metal fan disliking this band. “The Tower” is as good of a place to start as any, so start stretching your neck, and warming up your vocal cords!

Highlights
"The Tower"
"In The Land of the Damned"
"Yesterday's Hero"