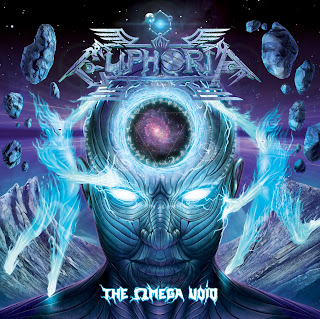 Detroit’s Euphoria made a huge splash with their Vektor-inspired tech-thrash record “Operation: Genesis” last year. Fortunately, they wouldn’t wait too long before giving us another taste of this cyberschizophrenic brand of thrash, as they have recently unleashed a new EP. Besides featuring far superior cover art, “The Omega Void” largely follows in the footsteps of its predecessor. Featuring mind-boggling riffing that sounds like it was written by extraterrestrial lifeforms, the songs on this EP are simply otherworldly. The band’s psychotic maelstrom of riffs is complemented by a vocalist whose voice defies logic. At times, he imitates a more predictable thrash singer, but he always has a tinge of shriekyness in his sound. There’s no shortage of ear-piercing screams on this record, and they only up the intensity of the music. If you ever successfully understand what he’s saying, it might be helpful to have a dictionary handy because this isn’t music about zombies ripping people apart: it’s some complex stuff (and I say that as someone with a Master’s degree…).

Surprisingly, even the production on “The Omega Void” is almost identical to the band’s debut. There was a unique, punchy bass drum tone that Euphoria had created last time around, and it is still retained on this EP. Aside from the drums, the guitars also stand out for having a razor-sharp tone, making some of the more standard thrash riffs even more aggressive. Despite Euphoria’s tendency towards all things extreme, they have some softer moments. The lengthy “Dimension Zeroth” has a huge melodic interlude where the band’s guitarist unleashes some fury on his fretboard. The remaining instruments eventually build back to heavier music, but the solo keeps going. The band’s ability to seamlessly move between these types of segments makes them far more effective.


There really aren’t many legitimate weaknesses of “The Omega Void”. While it does only have two full tracks, the latter is almost nine minutes of fun. The interlude of “Senescence” is definitely a waste of time, and consists of some scratchy violins with no clear purpose. Hopefully, the band’s future full-lengths avoid the progressive tendencies to stuff albums full of interludes that don’t really add any value. When Euphoria is thrashing, they do so exceptionally, so as long as they stay on track, they will definitely still be a band to watch for the future!

Final Rating
4.4/5 or 88%.
at 10:53 AM
Email ThisBlogThis!Share to TwitterShare to FacebookShare to Pinterest
Labels: 2017, Euphoria, The Omega Void