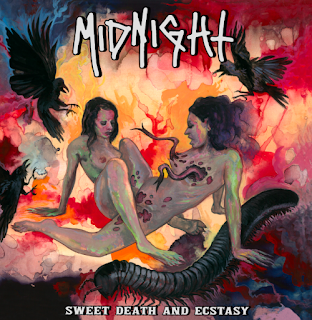 Few bands can claim as much responsibility for the recent rise of dirty black/thrash/speed metal as Cleveland’s Midnight. And while this naturally attracts a horde of incredibly untalented musicians making mediocre music, Midnight has always been a cut above their imitators. 2014’s “No Mercy For Mayhem” in particular was filled to the brim with energetic, catchy tunes. For this reason, the follow-up, “Sweet Death and Ecstasy” proved to be somewhat of a disappointment.

Make no mistake, this album still sounds like Midnight. Athenar’s Cronos-like vocals are still in tact, as he grunts his way through the record with little difficulty. Musically, the band hasn’t really changed their approach either, opting for a rough around the edges sound. The music is incredibly proficient for the style, and Midnight is adept at adding melody to their songs (a major failing of many of the band’s peers). Nevertheless, the album retains a sleazy, almost sloppy feel to it.

With a familiar sound, it might not be clear why “Sweet Death and Ecstasy” is a disappointment, but the truth is that the songwriting just isn’t as memorable as it was in the past. There isn’t a single effort that stands out as being an instant live favourite. It doesn’t help that the pacing of the record was mismanaged; it opens with a 7-minute, plodding track that does very little of interest, and then immediately rips into a shorter, speedier number that sounds exactly like what everyone would want out of Midnight.


After this, it’s business as usual for Midnight. Most tracks are on the faster side, and overflowing with simplistic, NWOBHM-esque riffs. So while the record might not be a disappointment for most, it just feels like Midnight bought into their own hype. While metal isn’t really relevant enough to offend anyone in 2017, the cover art feels like a cry for attention. The music is by the numbers, which isn’t to say it’s bad, but just not as brilliant as their past work. So if you’re a fan of Midnight, “Sweet Death and Ecstasy” is probably worth a purchase, but it falls very short of the band’s previous album.