Madrost – The Essence of Time Matches No Flesh 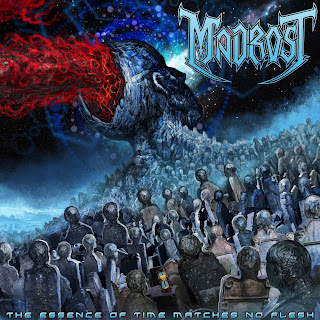 After 3 years, California’s Madrost returns with their most ambitious release to date: “The Essence of Time Matches No Flesh”. This album shows the death/thrash outfit incorporating more technical and progressive elements into their sound in order to create an album that is more of an experience than simply a collection of songs. The title of the record implies it might be a bit convoluted, and there is some truth to that. The opening track, “Eyes of the Deceit”, has a main riff that switches between distorted and clean guitars fairly consistently. The end result is something that is ear catching the first time, but ultimately feels a bit busy on repeated listens (particular as it also occurs underneath vocals at times). The good news is that Madrost often uses more standard methods of injecting technical feats into their songs. This record has no shortage of speed or intricate riffing, and often uses dissonance to great effect.

Though absent in the first track, one thing that becomes imminently clear is the influence that Death has had on Madrost. “The Silence In Ruins” in particular is overflowing with riffs that could have been on “Human”. The band delivers a similarly mechanically precise performance, as even the most breakneck of tempos are executed to perfection. There are numerous riffs that feature tremolo picking various root notes with a few higher-pitched notes highlighted. Madrost is definitely not so one-dimensional as to only copy Death, however. They also manage to use dissonance to create more epic sections, showing slight influences from a band like Dissection. The interesting thing about all of these comparisons, however, is that Madrost does it mostly under the guise of being a thrash band. These guys fit in very well with the younger modern thrash groups, even if they do sound a bit different. Perhaps it is because of the occasionally more straight forward drumming, the lack of excessively downtuned guitars, the prominent usage of melody, or even the understandable screamed vocals, but Madrost’s sound will certainly appeal to fans of groups like Warbringer, Vektor, or Havok.


“The Essence of Time Matches No Flesh” is an extraordinarily ambitious record. The songs are not always easy to follow, and often take a variety of twists and turns before returning to a familiar riff or melody. With that said, Madrost has enough self-awareness to realize that 7 tracks of this sound is enough. In comparison to many other technically proficient counterparts who stretch out their albums to an hour, Madrost deliver only the most essential material. This isn’t to say that every riff hits the mark perfectly, but the band does a lot of things right on this record, and the result is a unique, compelling death/thrash album!