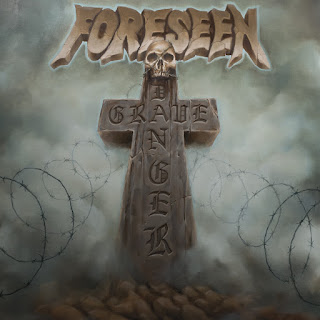 “Grave Danger” is the second album from Finnish thrashers Foreseen. Similar to fellow countrymen Lost Society, this band leans more towards the crossover side of thrash, but in great contrast to their peers, they take a wildly different approach. This album’s influences are more hardcore in nature, resulting in a more aggressive and less melodic sound. “Grave Danger” is a noisy affair. It feels unhinged, as though the band is about fly off the hook at any second. The furious guitar solos add to the out of control feeling the band consistently presents. However, the band's playing is incredibly tight, despite this wild sound.

Another strong point of comparison to Foreseen would be Midnight. Both bands employ a rocking, punky feel to their music that is completed by vocals that are nothing more than monotone shouts. Foreseen is, of course, much faster and thrashier, but employs a similar style nonetheless. The band tends to have a bit more variety in their sound, as they offer up riffs that show homage to a considerable number of bands. The opening riff on “Downward Spiral” even brings back memories of Agent Steel’s titular track.


To Foreseen’s credit, they ignore a common crossover trope of packing their album with too many tracks. “Grave Danger” instead is the band’s 8 most lethal efforts, leaving little room for filler. In all honesty though, these aren’t the most compelling set of songs ever written. In fact, there isn’t much on this album that is particularly memorable. As an exercise in creating a raw, dirty sound, it achieves its goal admirably, but amongst a crowded newer thrash field, Foreseen does little to stand out.