Alestorm – No Grave But The Sea 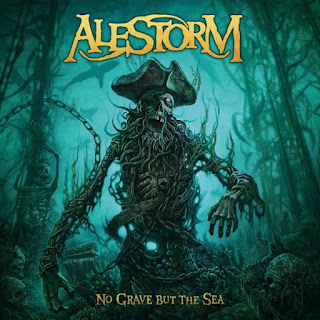 Metal’s most popular pirates are back after 3 years with their fifth full-length effort. “No Grave But The Sea” follows the formula the band has continued to perfect with each successive album, and offers little in the way of surprises. This is a record filled with catchy singalong pop anthems, lengthy questing epics, and the occasional hilarious comic relief song. This makes for a surprising amount of variety on the album, despite the very limited unique elements. On the whole, the band seems to be taking a more slightly folk metal turn, with tracks like “Alestorm” and “No Grave But The Sea”, among others, having some sections with folkier melodies. This is nothing new to the band, but it does feel like the frequency of these sections is a little higher than in records past.

The album’s title track gets things off to a quick start, as it begins with epic keyboard fanfare. The chorus has a disco-like drumbeat, making it the ultimate headbanging tune (but it’s so catchy that you’ll likely be caught singing along instead). “Mexico” takes the formula of a previous hit like “Drink” one step further. Opening with 8-bit sounds, this is one of the simpler songs, obviously designed for the live arena. The band’s title track, “Alestorm”, is crafted in a similar manner, though this track displays the most prominent use of Elliot Vernon’s harsh vocals, as he trades parts of the verses with frontman Chris Bowes.

“No Grave But The Sea” is much deeper than just its singles though. Both “To The End of the World” and “Treasure Island” are more serious efforts that take the listener through a myriad of sounds in hopes of conjuring a truly epic atmosphere. The former track in particular brings back memories of previous greats like “Death Throes of the Terrorsquid” or “1741 (The Battle of Cartagena)”. The band utilizes plenty of gang chorus vocals to make it sound as though their crew is trekking to the end of the world. “Treasure Island”, though slightly less effective, is still another enjoyable song, especially as the last minute of the song repeats the opening melody from “No Grave But The Sea” on an acoustic guitar, bringing the album full circle.

Of course, Alestorm can’t be serious for too long. The 6th track on this record, “Fucked With An Anchor”, is by far the funniest thing the band has ever done. This song lives to offend, and its straightforward chorus will continually punch you in the face with obscenities. The song itself isn’t necessarily one of the band’s most convincing efforts, but it does feel a little bit different to what they’d normally do, and works well given the jokey lyrics.

One of the strange things about Alestorm is that, as good as they are, it feels like all of their albums have a bit of filler on them. It’s impossible to rank each of their albums because they all feature a few of their best songs, a few great but not mindblowing songs, and then a few filler tracks. “No Grave But The Sea” continues this trend, with “Bar und Imbiss” and “Rage of the Pentahook” being the least compelling tracks. They’re faithful to the Alestorm formula, and don’t do anything that would make you dislike them, but they simply aren’t as memorable or enjoyable as some of the other tracks on the record. Fortunately, they’re pretty well spread out across the record, and some other deep cuts like the upbeat “Pegleg Potion” or the anthemic “Man The Pumps” keep things interesting right until the end.


“No Grave But The Sea” is a shining example of Alestorm’s consistency. It is impossible to see a fan of the band disliking this record, simply because it is so true to the band’s sound. The band will occasionally throw a curveball, but ultimately, they know exactly what their audience wants and they once again deliver it with this record. Sure, it’s not perfect, but it’s on par with anything else they’ve done, and most of the tracks are worth being played live. All in all, “No Grave But The Sea” is yet another excellent record!