All Else Fails – The Forever Lie 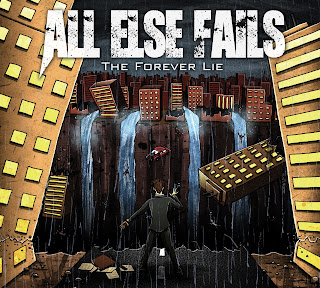 “The Forever Lie” is a recently released EP from Canadian band All Else Fails. If the warning signs aren’t going off in your head already from the band’s name, then I’ll confirm the unfortunate news: this is a metalcore EP. And like many bands in this style, All Else Fails is frustrating because they have things that they do completely right, but they waste little time ruining any moments of magic. The opening song is a great example, as it gets going with some acceptable growling, but it isn’t long before a whiny, out of tune clean vocalist comes along to ruin anything good the band had going. This is a common theme throughout the album: in the band’s more aggressive and brutal moments, they succeed at making something passable to the average metal fan. These sections are not to last, however, as it appears to be an inherent flaw of this style of music to have a really bad singer all over your music.

Beyond just the vocals, All Else Fails captures the other common elements of metalcore: melodeath-esque riffing and melodies (which are actually the best moments of the EP), and plenty of breakdowns. Fortunately, the breakdowns are primarily limited to the guitars, meaning that the music doesn’t totally break down, but All Else Fails is at their best when playing actual riffs. “The Sons of Plenty” is the sole highlight of the EP for this exact reason: the first 40 seconds or so unleashes a fury of thrashy riffing that appeals to even the most narrow-minded metal fans (i.e. me). This section does later return, but can't salvage the entire song.


As much as I’d like to harp on about the flaws of this EP, it really is just your standard metalcore release. Everything that is bad about it are the things that make that subgenre of music distinct from metal, and the reason why so many of us dislike it. Even if you dig one of the better bands of the style like Killswitch Engage, this is unlikely to hold your attention unless you really love the style.

Highlight
"The Sons of Plenty"

at 9:56 AM
Email ThisBlogThis!Share to TwitterShare to FacebookShare to Pinterest
Labels: 2017, All Else Fails, Canada, Metalcore, The Forever Lie