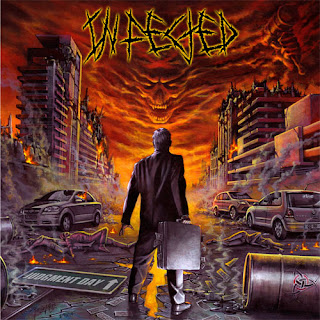 In the thrash resurgence of the last decade or so, Italy has to be one of the most productive countries. Every month a new band seems to pop out of nowhere with an album that is decent at worst, and mindblowing at best. Infected’s “Judgment Day” is the flavour of the month this time around, and it does exactly what one might expect a modern thrash album to do: deliver riffs. Ok, it does feel a bit padded out, with a 1.5-minute intro, and then another 30 seconds before the thrashing starts in the first full track, but once Infected gets going, they consistently present competent thrash.

Comparing the band to a specific scene or group is difficult, as Infected simply play straight-ahead thrash metal. They don’t add many elements of death or black metal (aside from an occasional death growl), but they also don’t go too melodic and become a power/thrash band. Despite the relatively limited territory they cover, the band often has a cool groove amidst the thrashing (see the chorus of the title track for the best example). In this respect, Death Angel might be the closest comparison; both bands have enough speed to keep any headbanger happy, but occasionally veer off the track to try something a little different within the realms of thrash.


The standout effort on this album is “Fight 2”, due to its slightly more melodic tendencies. This includes a somewhat more atmospheric chorus, and an extensive guitar solo section. As the album rages on, it largely offers more of the same: enjoyable riffs that don’t reinvent the wheel, but get the job done nevertheless. And this description is really true of Infected and “Judgment Day” as a whole. The band is good at what they do, but are unable to separate themselves from the crowd. If you’re a thrashaholic , this is worth hearing, but is not necessarily the best that Italy has to offer.