Craven Idol – The Shackles of Mammon 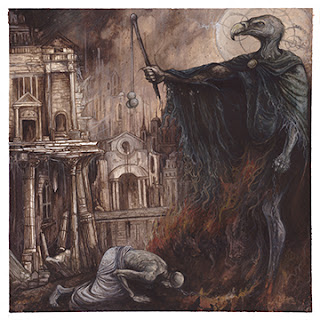 As the years roll on, and metal becomes increasingly convoluted in its categorizations, bands have continued pushed the envelope to see how they can meld these styles together. So much so, that it becomes difficult to even truly narrow a band down to a particular subgenre. This leads us to Craven Idol, who just unleashed their second record entitled “The Shackles of Mammon”. The band is typically billed as black/thrash, and while that is perhaps the most accurate depiction of their sound, it doesn’t capture the entire spectrum of their influences. Unlike many bands who have earned the same label, Craven Idol is by no means primitive or sloppy. This is a very technically accomplished band that lets you know their skill by creating maniacal moments of chaos (see the reckless soloing amidst a fury of blasting on “Pyromancer” for one great example). At other times, they successfully conjure darker, more sinister atmospheres.

In addition to the black and thrash metal elements the band utilizes, there are also plenty of death metal sounds (particularly the way the double bass rolls on at times), and even some hints of punk. Never lost amongst the variety of this record is the fact that Craven Idol always has a plethora of great riffs to offer. Many of them follow the formula of beginning with some tremolo picking and then hitting a few descending or ascending notes in the latter half of the riff, but these are by no means the band’s only weapon in their arsenal of riffs. Straight 16th tremolo-picked riffs are also common, but Craven Idol ensures they don’t feel unoriginal (a commendable feat given that death and black metal have seen 25+ years of these riffs). The band isn’t afraid to move up the neck to some higher registers, which helps keep their sound from becoming monotonous.


Though this album has an impressive display of diversity, none of the songs stand out from one another in terms of quality. Even the two epics, which hover around 8 minutes each, simply feel like longer versions of the other songs. This isn’t necessarily a criticism; if you like Craven Idol’s sound, it just means that the quality never wavers. Though there are a slew of albums from bands playing this strange amalgamation of sounds, “The Shackles of Mammon” never feels derivative. Craven Idol has enough unique tricks or keep things interesting, and ultimately, it has resulted in a satisfying record.