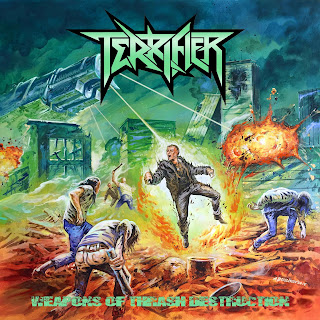 Upon first glance at the title “Weapons of Thrash Destruction”, one of two thoughts will form in your mind. If, like me, you appreciate the juvenile themes of thrash metal, then Terrifier's second record will have immediate appeal (let’s be real here; nobody really wants to be an adult anyways). Alternatively, should you cling a little too tightly to the underground, then this album will be another drink coaster along with the discographies of Municipal Waste and Warbringer, among others.

This means that “Weapons of Thrash Destruction” is exactly what you would expect it to be: competent modern thrash that stays true to the subgenre’s roots. The album is an insane amount of fun, and though it doesn’t have the staying power that some of the aforementioned band’s records do, it is still an enjoyable listen. Terrifier tends to get a bit more extreme than a lot of modern thrash bands, as they are not afraid to use blast beats often (one listen to the opening song “Reanimator” will make that quite clear). These guys also like to shred and inject heavy dosages of lead guitars all throughout the album. Sometimes things get a bit chaotic, but the playing is always tight enough to overlook any truly cacophonous sections.

To complement Terrifier’s extreme approach, their vocalist also leans towards the more aggressive side of thrash vocals. Bands like Kreator and Morbid Saint are good points of comparisons, but there is a slightly more modern edge to these vocals, as there is a bit of a bite on the end of each vocal line. In this respect, a band like Hatchet might be more comparable vocally. Nevertheless, Terrifier’s singer shouts his guts out, and, when combined with the maximum riffage this band delivers, it results in a satisfying product.


As you may have determined by now, one of the strengths of “Weapons of Thrash Destruction” is that there is absolutely no compromise. Most of this album is blazing fast, and it only gets a little slower at times to unleash stomping, whiplash-inducing riffs (there are some clean guitars on "Riders of Doom", but this is your classic ominous, old-school thrash interlude). Forget ballads, groove, or half-thrash riffs; this album presents the weapon of mass destruction known as thrash metal, and it does it well. There is room for improvement in the songwriting, but sleeping on this record would be a major mistake!