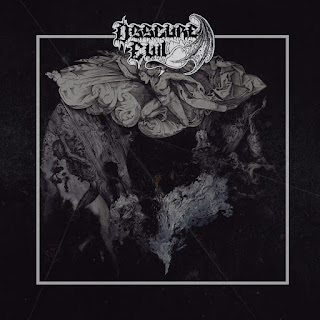 Peru’s Obscure Evil is having a productive 2016. After putting out a demo earlier in the year, this black/thrash group is back with an EP that is once again a joint production between Unspeakable Axe Records (CD/digital) and Caligari Records (tape). If you missed the band’s first release, “Void Fumes” is still an appropriate place to start, as it continues their hazy, ethereal approach to ripping blackened thrash. The riffs on this EP are shrouded in atmosphere, literally. Though you can clearly hear the riffing, the production as a whole is not clean. The EP sounds like an echo chamber, with the cymbals in particular being quite loud. This makes for a chaotic release that accomplishes exactly what it sets out to do. Make no mistake, “Void Fumes” is an underground record that is totally devoid of any mainstream appeal.


In the span of 25 minutes, Obscure Evil has packed a lot of riffs on this release. This is most evident in the instrumental song “Darkness Descends Upon The Eternal Flames of Doom”, but the most potent riff comes at the beginning of “The Ceased Thrust”, where the band succeeds in writing some of the thrashiest music possible. A lot of the riffs tend to be on the simpler side, with some of the more adventurous moments incorporating trills and other slightly quick fretwork. In general, the band worships at the altar of “Show No Mercy” with their riffing style, but they do speed things up beyond 1983 tempos, and also incorporate slightly more modern elements like the occasional blast beat. Overall, “Void Fumes” is largely on par with the band’s first release. Fans of the band will be satisfied with this EP, and newcomers would be better off to start with this release as it has more material. It isn’t the type of record that has a lot of memorable moments, but it absolutely crushes during its runtime.